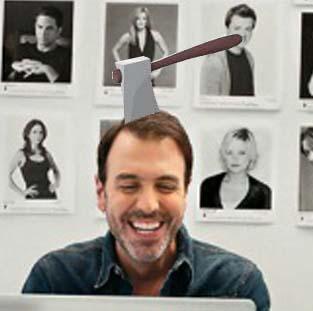 Ron Carlivati took over as head writer of General Hospital after One Life To Live went off the air (previous job) and came along with Executive Producer Frank Valentini (also after OLTL ended). Since Ron Carlivati's reign many legacy characters portrayed by their original actors have left the show or returned only to leave again, disgruntled by the shoddy frenetic writing. He further has taken personal grudges of his making to Twitter and other public online forums such as with John Stamos and Sean Kanan, the latter who revised the character he originated as an adult over 20 years ago only for Ron to write him off after Mr. Kanan requested some screen time/decent storylines as was promised when he returned.....then R.C. took to Twitter saying "Sean Kanan is like school in the Summer...NO CLASS". When Stamos refused to return R.C. made a point to make viewers believe his character would return regardless only to embarrass him through his character.

Ron Carlivati is a vengeful, petty man who, if allowed to remain, will drive more General Hospital viewers away and eventually off the air. Please let the powers that be at ABC know how relevant his removal/replacement is so the show can return to it's roots and possibly bring back legacy characters while not losing more.