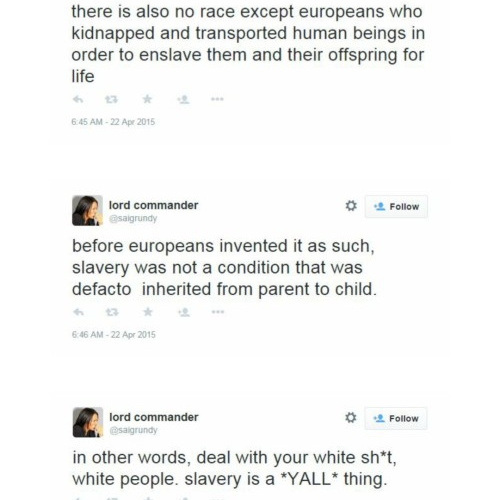 "Saida Grundy, an incoming assistant professor of sociology and
African-American studies at the school, tweeted in recent weeks that
"white masculinity is THE problem for america's (sic) colleges," white
men are a "problem population," and that she tries to avoid shopping at
white-owned businesses. On Friday, her new employer's spokesman, Colin
Riley, told FoxNews.com that the tweets came from Grundy's personal
Twitter account and that she was "exercising her right to free speech
and we respect her right to do so.""

Saida Grundy is an obvious racist and Anglophobe. Her one-sided view of the world can not possibly nurture open debate and contemplation of the subject matter she is supposed to present to impressionable students at Boston University. Her bigoted tweets and publicly espoused opinions on race should preclude her from a teaching position at any school.

Saida Grundy should be allowed her opinions and freedom of speech to say these racially charged and incendiary statements, but should suffer the public consequences of her statements as have others that have made openly racist statements in the past such as Paula Deen, Anthony Cumia, and Justine Sacco.

Let Dr. Robert Brown know the American people will not stand for a racist educator indoctrinating the youth of America!