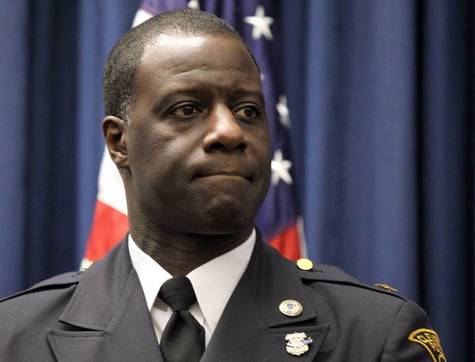 12 year old Tamir Rice was playing with his toy gun in the park when he was shot and fatally killed by Cleveland Officer Timothy Loehmann in less than one second. Loehmann was an officer in training and was "training" that day. As of yesterday, no charges were made on Loehmann or the other officer who was with him.

Then whose fault is it?

Williams said that the shooting of Tamir Rice was due to a failure of the system and not the officers or Tamir Rice’s actions.

If that's the case then Cleveland Chief of Police, Calvin Williams needs to take responsibility for the death of 12 year old Tamir Rice and immediately step down from his position. It is clear that he is not fit to be Chief of Police if he can not see the flaw in officer Loehmann for wrongly killing a 12 year old boy.

The rookie Cleveland police officer who fatally shot 12-year-old Tamir Rice had been deemed unfit for duty at a previous police department in Independence, Ohio and was in the process of being fired when he resigned from his post. As many as seven police departments and programs turned him down in the aftermath of his termination from Independence, but Cleveland, which claims they never checked his records, hired him. They should be held accountable for this mistake of fatal proportions.

Why he was hired in the first place is a good question, why he didn't get fired for killing a 12 year old boy is a better question. Officers will continue to kill innocent people if they know they can get away with it. Our Police Chief's need to be held accountable for the actions of their officers, and if they believe that their officers can wrongfully kill people and not face any consequences, then they need to be replaced.