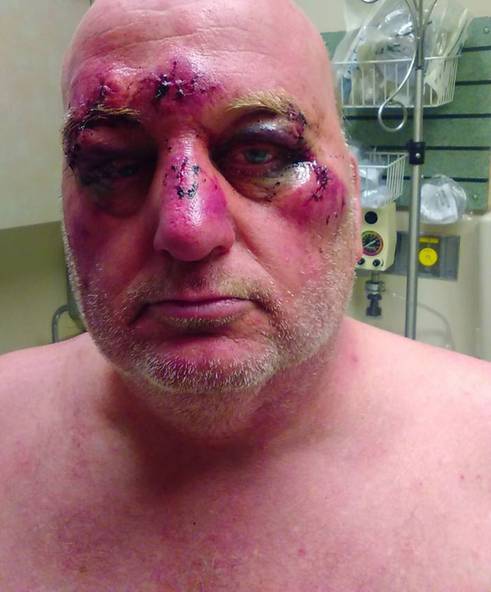 WE DEMAND THE RELEASE OF RONNIE!

THIS IS UNFAIR FOR HIM TO BE IN JAIL!

PLEASE SIGN FOR SUPPORT OF RONNIE & HIS RELEASE! Please help us get my brother out of jail!

This is what my twin brother Ronnie Hall looked like after three presumably drunk home invaders entered his home, collectively beat him, because they took exception to him telling them not to urinate in front of his apartment. They were ran off of the property by the landlord, but returned approximately 45 minutes later with intentions of harming Ronnie, as you can see from his picture and from witness testimony. The Kentucky Legislature passed a very expansive self protection law in 2006 (The Castle Doctrine or The Stand Your Ground Law) that in his attorneys opinion gave Ronnie the absolute right to defend himself and shoot the three home invaders. At this point Ronnie is still in jail, unable to post the fifty thousand cash bond. I guess it's more important to protect the rights of violent home invaders, than the rights of those whose homes have been invaded and have been attacked!

Ronnie has now been in jail for 39 days (as of 5-24-16) after shooting the three home invaders who attacked him after bursting into his home in Hueysville, Kentucky. His lawyer filed pleadings relying on the so-called castle self defense statute that affords protection to those who are the victims of violent home invasions.

Ronnie had to have a blood transfusion of 1 pint of blood, got a concussion, terrible wounds on his face that required many stitches and this was caused by an assault from 3 men on 1 disabled man.

Please take just a moment to sign this petition, if we stand together we can fight for our rights to defend ourselves in our own homes and just maybe we can help get these charges be dropped so that Ronnie doesn't suffer the consequences of defending himself and his own life.

And may God bless you all!

~~~In the United States, a stand-your-ground law (sometimes called "line in the sand" or "no duty to retreat" law) is a law that authorizes an individual to protect and defend their own life and limb against threat or perceived threat. This law states that an individual has no duty to retreat from any place the individual has a lawful right to be and may use any level of force, including lethal, if the individual reasonably believes they face an imminent and immediate threat of serious bodily harm or death. ~~~

The use of deadly force is legal as long as the person is doing it to protect themselves or others for immediate harm. In Kentucky there is no duty to retreat.

~~What is Castle Doctrine?

Castle Laws are laws that address the use of force when defending one's self inside their home, or on their property. Some states expand this to vehicles, and the person's place of work.