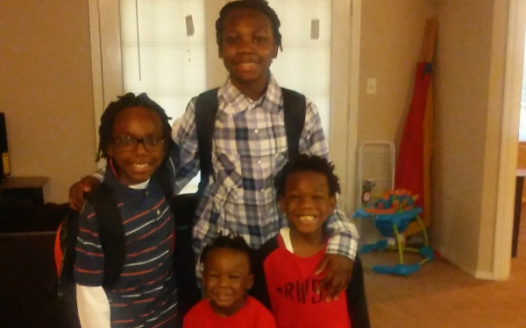 Fighting for a Mother Freedom

My name Is Mariela (Vileinor) Jean am requesting help to free my name from the corrupted criminal justice system. Single mother of four boys and my son has emotional outbursts and mental issues my son lied and stated that I burn him with a spoon.

Which caused me to lose my children,job,and home.

Right now my son will be turning 14 next month they're charging me with second-degree battery on a family member.which is crazy that my son is aware that he was going to be sent to a program so I am in trouble for protecting him and stopping him from trying to hurt me and his other siblings while I try to remove the spoon from his hand . I raised all four boys for 13 years not once I ever asked their father for help because their father chose not to be in your lives.

I was a full-time student also full-time worker and most importantly a full-time mother. Ryan Phillips the Prosecutor in Magnolia Arkansas is trying to give me prison time. But at the same time I am allowed to visit my children every week once a week the same children that they claim that I abused?

That doesn't make any sense at all. If I am such a bad parent why am I able to buy the materials that the children need which is lotion deodorant soap Exedra socks and also pay for their haircuts and also bring food from home that I cook safely never missing a visit.

If I am such a bad mother or as they called me a monster in the newspapers and why am I allowed to have supervised visits with the same child that claim that I hurt?

I'm requesting anyone and everyone who may understand the struggle of being a single black mother or just being a single mother point blank. In the United States of America. Being harassed by the Department of Health & services which is also called Child Protective Services who have lied and has also neglected all for my children especially my 4 years old who had dreads in his hair wish I had to cut March the 19th of 2018 because his hair was badly matted from not being taken care of and not even being washed.

Secondly, I have before and after pictures of how my children look before they took them and after they took them I have did everything that these people ask me to do I have completed my parent classes I have completed the psychological evaluation I have also make sure that I have been got a place which is a 3-bedroom 1-bath I also have to get another job I have to make sure that all needs are met Faithfully each and every time I document every conversation the Department of Health & Services have said about me or have lied about me and also I have noticed how my children look very miserable and very unhappy. Also did I forget to mention that they stated I was a Flight Risk when they lock me up for 90 days? Because they seem that I used to travel from different states little did they know I was also IT specialist and also IT consultant.

Since when in America that you have to stay in one place all your life where is that in the Constitutional law?

I'm asking everyone to please look in this and ask yourself do you really think I deserve to go to prison for protecting my son from himself if that's the case and every mother and father in America need to go to prison as well for trying to protect your children from harming themselves and harming the other children and you and a household.

Thirdly, The pain and suffering that I have endured since they took the children is more than I could even imagine for someone else ever since I stood up for my son's right at Magnolia School District and wrote a letter to the office of civil rights of Board of Education I have been a Target in this little town ever since. And I believe they are trying to set me as an example for anybody else who is not from this small town which is unethical in cruel and very brutal. Is crazy that I have fight for my children and also fight for my rights as a mother I have paid for a lawyer his name is Rickey Hicks in Little Rock Arkansas.

I'm just requesting everyone to please sign my petition and help me get my children back their names are Isaiah Isaac ,Israel,and Ishmael.

May God Bless you all

I pray that this judge who is Judge Talley makes the right choice.

If not my children will continue to suffer in the hands of this corrupted justice system which has failed a lot of families and also me.