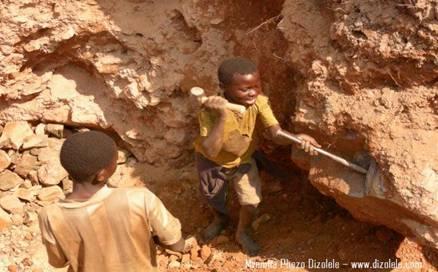 Have you ever considered where the materials used in your electronics come from?

Coltan is a metal used in almost all electronics and most of the world's coltan is mined in the Congo, a country riddled with poverty and conflict.

Apple Inc. has publicly denied having connections with the Congo mining trade. However, the United Nations recently released a report that linked Apple's manufacturer Kemet to the illegal mining trade in Eastern Congo, which proved that Apple was, and still is, linked to the illicit Congolese mining industry. Child labour is big problem there: children leave school, often with their families, in order to gain enough money to support themselves. This results in a lot of conflict and gang wars between groups fighting over coltan for survival.

In the Congo, the extraction of minerals has been sustaining rape and mass slaughter for many years on end. As of April 2007, the war in Eastern Congo (christened the 'rape capitol of the world'), has claimed 5.4 million lives, with a death toll of 45 000 per month, many of whom are children.

The mines are often situated in areas there are secluded and inaccessible. Over half of them are occupied by armed rebel gangs who use methods of rape, violence and illicit taxation to force civilians to preform labour. The workers (again, many of whom are young children) are forced to mine for aslong as 48 hours straight. As a result, many people die from sheer exhaustion.

War lords in the Cogno fund their felonies - mutilation, forced cannabilism and rape, to name a few - in part, through the sale of coltan, which is very valuable because of its low supply.

Children sacrifice their futures so that they can mine coltan for our electronics. Is this right? Is this really what we are sustaining when we buy Apple products: mass slaughter in the Congo?

This is why we must speak up against the illegal mining trade in Congo. We must pressure Apple to stop getting its coltan from the Congo, where it is ruining lives, one child at a time.

That's not to say American electronic companies are responsible for the war in Eastern Congo, or that the elimination of these so-called "conflict minerals" will stop this violence, but they are a driver of conflict and they will continue to be until people commit to using "conflict-free" electronics.

So how can you help? By signing this petition, you are taking action the illicit mining trade in Congo. Once we hit our target amount of signatures, we will send this petition to Apple Inc., demanding the end of using "conflict materials" in their products.