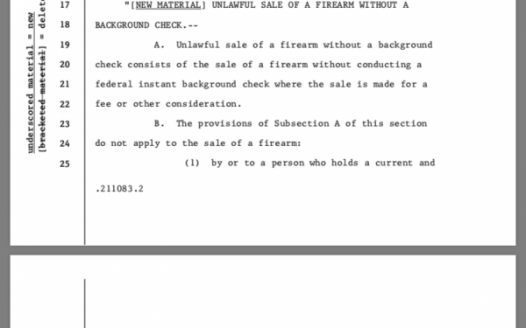 Senate Bill 8 has passed Judiciary and is on its way to the senate floor. As a Federal Firearm License business by signing this petition am showing that I am against these bills for the following reasons:

-SB as written will force federal firearm licensee's (FFL's) to turn away citizens that would like to perform background checks covered under this bill for the following reasons:

1. SB8 is in conflict with Federal Law, if an FFL attempts to perform a background check on firearms as defined by SB8, they will have their license revoked due to abuse of the system. The state does not allow for the exemptions that Federal law provides for (ie antiques and black powder guns). SB8 does not exempt guns that are not "firearms" under federal law forcing FFL's to break the law.
2. The bill requires an affirmative "proceed" response to a NICS check and rules out a transfer based on a "delay" response. This is in conflict with Federal law. Many times, NICS checks come back as a "delay", which means that if the FFL does not receive a final determination from the NICS after 3 business days have elapsed, it is within the FFL's discretion whether to proceed or not"
3. Sales between two FFL's would require a background check
4. there is no immunity of liability for the FFL or the private seller in this bill.