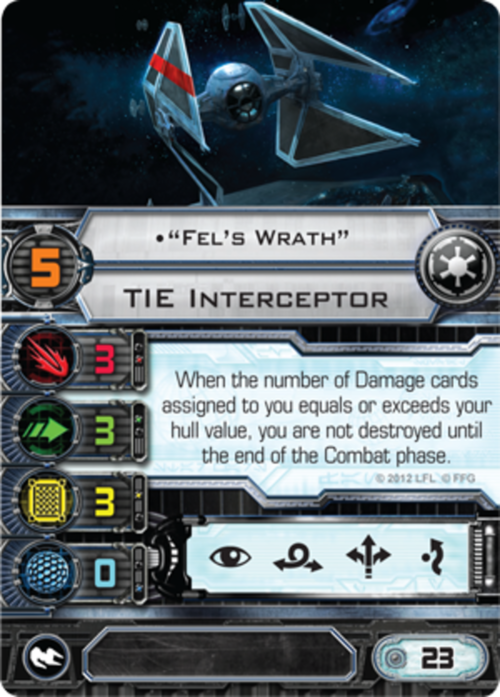 The TIE Interceptor Expansion was released in wave 2 of x-wing. We have seen almost 20 FAQs come and go since then. 20 opportunities to fix the horrendous design mistakes made long in the past. Yet FAQ 4.3 gave me hope. I downloaded it on my phone whilst at work, so excited and brimming with hope that I was. Alas, I should be used to disappoint by now, for there was still no nerf to the most broken pilot in the game: Fel's Wrath.

Sure, you can make Zukkus a less stressed out guy, you can give the Emperor a bit of a tickle. Hell, Manaroo is now far less generous with her tokens. But all these adjustments are just ways for FFG to avoid the real problem limiting their design space.

I've always believed that a healthy game is one that provides smart fliers good options for counterplay in most given situations. Fel's Wrath spits in the face of counterplay. Whatever you do in an attempt to outsmart him, it won't matter, for he is immortal. If you try taking him head on in a joust, he cares not for what you do to him, you're still going to be on the receiving end of his wrath. You can't even strip his tokens. Most ships would be throwing their tokens away as they beg for mercy and life. He can just save his focus for the attack without a care in the world.

So if you can't joust the madman, what are your other options? You'd think you would be able to turn his low pilot skill against him, by dodging his arc. But this will require your precious actions, and thus you'll lack the firepower to punch through his interceptor defenses without any dice modification to assist.

Fel's Wrath counters every ship in the game, as the goal of a starfighter is to destroy other ships. But Fel's Wrath just ignores death. He breaks the core mechanics of the game. But not only does he directly counter every ship, but also specifically counters Corran Horn, who is haunted by the ghost of Fel's Wrath for an additional turn.

There's also the football issue, that is, no one likes games that end in draws. Fel's Wrath is a draw making machine. He either wins, or if you somehow make it to the lategame, he draws. When your condition for winning is killing your opponents ships, and that doesn't work, you can't win. A draw is the best case scenario for Wrath's opponent. If you draw, you both lose, but the Fel's Wrath player gets to keep his smug grin because he managed to cheat you out of yet another victory.

The recent nerf to Palpatine will only accentuate the problem of Fel's Wrath. Fel was the only interceptor not reliant on Palpatine's assistance, as defense means nothing to him and his attacks are fueled by burning vengeance. Without Palpatine, Fel's Wrath becomes even more potent compared to the current interceptors than he already was, which means that local metas everywhere will be flooded with the bastard. Faction diversity will be a long forgotten joke, as the only questions worth asking when building lists these days are "what pairs well with Fel's Wrath." Literally anything, is the appropriate response, as Fel's Wrath is so undercosted he leaves room in your list for ships fatter than Jabba. The undercosting of Fel's Wrath is largely in part to the fact that he needn't take the staple interceptor modifications, autothrusters and stealth device, for defense is a meaningless statistic to him. The cost of these modifications should really be built into him, placing him at a more reasonable 28 points. I know it's only a start, but every journey begins with small steps.

The truth is point reductions will never truly reign in the power of Fel's Wrath, because his fundamental mechanics of **ignoring death** are broken beyond repair. His whole ability needs to be discarded and replaced if the xwing meta ever hopes to recover.

But it's not just his ability that makes Fel's Wrath the most potent ship in the game. His pilot skill is completely bonkers. I don't know who at FFG figured that they could give this maniac of a pilot 5PS, but I hope they are well and truly fired for their mistake. 5PS is most definitely the best PS in the game, as it gets the best of both arcdodging and blocking. Most ships can only excel at one of these, but Fel's Wrath is a jack of all trades, as if his pilot ability wasn't good enough. 5PS can dodge all the generics, whilst forcing the high PS aces into awkard bumps. And, as icing on the cake, it also makes the single strategy that is effective against Fel's Wrath more costly.

"What is this strategy?" I hear you beg. That or you're scoffing out of disbelief. Well, trust me, it's the only semi-reliable way of ensuring your local meta doesn't suffer chronic Fel's Wrath over saturation. Essentially, the only way to ensure that Fel's Wrath doesn't get to abuse his ability is to give him the blinded pilot crit. But that will only see that happen once in your lifetime, if you're lucky. You've got to force that crit on him. That's why I take 4 Gamma Squadron Veterans (PS5 TIE Bomber's) all with calculation and saboteur. Why not 5? You've got to have a huge initiative bid, at least 10 points, to make sure Fel's Wrath doesn't shoot first. Otherwise you've already lost. Between all those crits and cards being flipped, there's a solid 10% chance he gets a blinded pilot card, which is a 10% chance that you don't instantly lose the game. Of course, he can still arc dodge you, so this strategy requires immense piloting skill, and you must keep shooting him even if he's dead, because if you don't keep pummeling shots into his hull till he has that blinded pilot crit, he will make you regret it.

Of course, this is arguably another strength of Fel's Wrath. He continues to demand your focus and priority targeting even after he's dead, meaning on average he'll absorb about half the damage deck which you could have been putting into other ships. This means he essentially has Biggs's ability in addition to his own, as well as an extra 12 hull upgrades due to the damage he absorbs. If we deduct the cost of the t-65 from Bigg's ability (25-0 because the t-65 itself is worthless) and then combine the cost of that will the 12 hull upgrades + the stealth device and autothrusters mentioned earlier, we realise that Fel's Wrath would be more aptly costed at 89 points (23+25+2+3+12*3). For those of you who weren't convinced before, you can now clearly see the insane game-breaking value that this pilot offers.

If I were to sit here and continue listing the reasons why Fel's Wrath is the most broken piece of game design ever to haunt the top tier competitive x-wing scene, I would be here until they release the FAQ removing him from the game, that is, I'd be here forever. I think by now you have an idea of the monstrous future that x-wing faces. I for one am selling my collection and getting out while I still can. For those who wish to stay and fight the good fight, I have created a petition you can sign. I can't wait on FFG any longer. Maybe some of you are stronger than I.