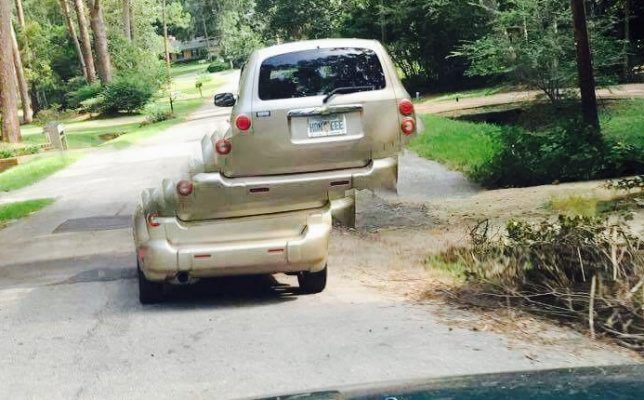 FEDERAL GOVERNMENT - TAKE ME OFF YOUR FRAUD ENEMIES LIST NOW

Official Request to be taken off the Unconstitutional, Non-consensual, Human Targeting & Kill List

According the the Supreme Court decision, Marbury v. Madison, which has never been challenged much less overturned, any law that is passed in the United States, or any of its territories, which is contrary to the Constitution is void. This would apply to rules, regulations and directives too.

Photograph by Karen Melton Stewart. Taken in the summer of 2016 in Tallahassee, Florida.

This photo shows the distortion resulting from an iPhone photo mechanism attempting to take a photo while in the very strong and harmful electromagnetic field of an illegal, Directed Energy Weapon (DEW) emanating from the trunk of the car, Florida tag [HON EEE], as it illegally targets the intended victim, the photographer, with a mobile DEW which is classified under 18 US code as a weapon of mass destruction (WMD) and a weapon of Domestic Terrorism.

I am writing to you to demand that my name be taken off of whatever “enemies list” (Terrorist Watch List, fake Terrorist Watch List, Enemies List, Kill List, Human Non-Consensual Experimentation List or contract, UN Agenda 21 Kill List, etc.) or whatever other list you have fraudulently and criminally concocted as a cover for the mass, invasive non-consensual, covert weapons testing, neurobiological weapons testing, secret illegal implantation of medical chips and other invasive devices, nano technology contamination, morgellons contamination, radiological poisoning, food and contact poisonings, gassings, etc., which you are knowingly subjecting literally thousands of innocent, noncombatant Americans to, based on no criminal criteria whatsoever, but a wink and a nod from a crony involved in this shameful, depraved, America-originated, Silent Holocaust of a human trafficking and asset-stripping criminal scheme, perpetrated by a crime syndicate heavily infiltrated within elements of the government like DHS (really registered as a private for profit entity), CIA, NSA, FBI, ICE/Border Patrol, etc., to include the private enterprises of Fusion Centers, their illegal hybrid army of mercenary, traitorous, civilian proxy brown shirt thugs, and the bribed, clueless, or intimidated State and local authorities, law enforcement and criminal elements within the community, to include private criminal, predatory “security companies”.

We, your victims, are quite aware that whatever “laws” and “directives” that you have illegally passed (no doubt secretly to avoid judicial scrutiny as well as public scrutiny and outcry) to attempt to justify this fraudulent, criminal war on innocent people, are indeed unconstitutional and illegal. You have purposely perverted and misinterpreted law to try to justify the seditious trampling of the 4th Amendment, 6th Amendment, 8th Amendment, and 14th Amendment, while creating an elaborate matrix of maniacal misinformation, misogyny, and murderous malice for personal profit. Your criminal actions and utter refusal to afford citizens their inviolate Constitutional, Civil and Human rights based on contemptibly feeble legal sleight of hand, are also indefensible in light of the cornerstone founding principles of the United States, exemplified below, on pages 3 – 5.

The Supremacy Clause of the United States Constitution (Article VI, Clause 2) establishes that the Constitution, federal laws made pursuant to it, and treaties made under its authority, constitute the supreme law of the land. [1] It provides that state courts are bound by the supreme law; in case of conflict between federal and state law the federal law must be applied. Even state constitutions are subordinate to federal law. [2] In essence, it is a conflict-of-laws rule specifying that certain national acts take priority over any state acts that conflict with national law. In this respect the Supremacy Clause follows the Article VIII of the Articles of Confederation, which provide that “every state shall abide by the determination by the United States Congress assembled, on all questions which by this confederation are assembled by them”. [3] A constitutional provision announcing the supremacy of federal law, the Supremacy Clause assumes the underlying priority of federal authority at least when the authority is expressed in the Constitution itself. [4] No matter what the states or the federal government might wish to do, they have to stay within the boundaries of the Constitution. This makes the Supremacy Clause the cornerstone of the whole American political structure. [5] [6]

However, note the supreme, all important caveat:

Any law passed contrary to the Constitution is void.

Such as any law, rule, directive, etc. that goes contrary to the

4th Amendment – “The right of the people to be secure in their persons, houses, papers, and effects, against unreasonable searches and seizures, shall not be violated and no warrants shall issue, but upon probable cause, supported by Oath or affirmation, and particularly describing the place to be searched, and the persons or things to be seized.”

6th Amendment – In all criminal prosecutions, the accused shall enjoy the right to a public and speedy trial by an impartial jury of the sate and district wherein the crime shall have been committed, which district shall have been previously ascertained by law; and to be informed of the nature and cause of the accusations; to be confronted with the witnesses against him; to have compulsory process for attaining a witness in his favor; and to have the assistance of counsel in his defense.”

8th Amendment – “Excessive bail shall not be required, nor excessive fines imposed, nor cruel or unusual punishments inflicted.”

§ Section 242, - Conspiracy to deprive of Constitutional Rights under color of law;

§ Section 832, - Participation in use of weapons of mass destruction;

The destruction, alteration or falsification of records in Federal investigations…CHAPTER 75

§ Section 2385 - Advocating Overthrow of US Government (sedition of Constitution);

§ Section 2389 - Recruitment for service against the US (sedition of Constitution);

§ Section 2390 - Enlistment to Serve Against the United States (sedition of Constitution);

CHAPTER 119 - WIRE AND COMMUNICATIONS INTERCEPTION AND

CHAPTER 123 – PROHIBITION ON THE RELEASE AND USE OF CERTAIN PERSONAL INFORMATION FROM THE MOTOR VEHICLE DEPARTMENT RECORDS. (To use for identity theft & fraud)

Other oaths of American authorities being blatantly ignored or perverted by the depraved complicity of military, judiciary, law enforcement in illegal human trafficking, slavery and eradication – both Federal and local:

U.S. Military Oath of Service – “I Do Solemnly Swear (or Affirm) that I will Uphold the Constitution of the United States of America, Against All Enemies Foreign or Domestic, …Pledging My Life, My Fortune, and My Sacred Honor. So help Me God.”

Each justice or judge of the United States must take the following oath or affirmation before performing the duties of his office: “I, _______ ______ (name), do solemnly swear (or affirm) that I will administer justice, without respect to persons, and do equal right to the poor and the rich, and that I will faithfully and equally discharge and perform all the duties incumbent upon me, as ______ , under the laws and the Constitution of the United States. So help me God.”

I [ name ] do solemnly swear (or affirm) that I will support and defend the Constitution of the United States, against all enemies, foreign or domestic; that I will bear true faith and allegiance to the same, that I take this obligation freely without any mental reservation or purpose of evasion; and that I will well and faithfully discharge the duties of the office which I am about to enter. So help me God.”

This is but a sampling of the Constitution and legitimate Constitutional laws as well as oaths being broken now by DHS/CIA/NSA/FBI/FUSION CENTERS/INFRAGARD (as well as actual local law enforcement) and other unconstitutional militarized and mercenary Community Policing organizations (illegal secret standing armies) aka proxies being used as a buffer to criminal and conspiratorial harassment and murder ordered by criminals within the Federal government illegally using their positions to execute blatant human rights violations and war crimes for profit.

Under-the-Table tax money is being misappropriated/stolen to be used for enticing and rewarding civilians to commit crimes for the government for the purpose of targeting innocent Americans. The targeting protocols are the subjection of those innocent Americans to: massive slander, fraudulent fear- and hate mongering of them to the gullible public, stalking, mobbing intimidation, encouragement of the public (i.e. “Community policing”) to provoke and bear false witness against, spy on/report/invade the private business of, record or repeat private conversations or information from illegally intercepted emails, phone calls, and US mail from engaging in mail theft and tampering by proxy criminals, and the overt crimes of package theft, break-ins, pet thefts, pet mutilations and pet murders, regular theft, vandalism, trespassing for criminal intent, cyberstalking, illegal placement of gps tracking devices on the victim’s car, the use of gasses, poisons, covert harmful/lethal electronic weaponry (meant for war) on them, the intimidation, bribery, or usurpation of medical treatment and procedures to illegally implant tracking devices, medical chips, and other non-consensual, medically unnecessary, experimental or oppressive and harmful devices and technology as a means to hijack and steal a victim’s life to serve a government or corporate master which pays to “own” a contract on that person. This is because unconstitutional laws have been purposely and calculatedly misinterpreted to mean that anyone secretly put on the Watch List or similar such list, can be secretly stripped of his Constitutional, Human and Civil Rights and sold into slavery to one of many predatory entities participating in this new human trafficking, new human slavery enterprise based on a fraudulent or vastly overstated risk of “terrorism”, which is purposely being bloated by the insane number of foreigners being brought into this country with little to no vetting, for the purpose of diluting the population which is well aware of Constitutional Rights with a foreign population that has no such concerns or allegiances, is only here for largely parasitic or oppressive intent, and whose creeds are often in staunch apposition to such concepts, which was a general concern to the Founding Fathers as apparent in their precautionary warnings, and frankly unfair to those who do come wishing for assimilation.

We, the victims of the 21st Century Dark Ages of Techno-terrorism totalitarianism employed by Technocratic would-be slave masters, demand the immediate cessation of the human trafficking and slavery efforts against us by those whose charge it is to protect us, the right to defend ourselves in any way we see fit if laws and legal help are not immediately forthcoming, and we demand the arrest under terrorism laws and indefinite detainment of all involved as well as the immediate and complete asset-stripping of each and every entity and individual involved in our vilification, slander, torture, enslavement, false imprisonment, conspiracy to deprive of our constitutional rights, in the creation of our illnesses, injuries, murders or forced suicides. And the redistribution of those funds to each and every verifiable victim or survivor of these unparalleled crimes against humanity, based on length of suffering and damages – to be decided BY KNOWN and TRUSTED Leaders of the community with the help of legal experts with integrity.

We demand the death penalty for any/all engaged in our assaults who knew or should have known that they were conspiring to deprive us of our Constitutional rights and our very lives for their own monetary gain. We further demand that a Constitutional court show them the mercy they showed us, which was none whatsoever. Due to the heinous, egregious, and utterly depraved nature of this conspiracy to torture and murder for profit, we remind authorities of good conscience that rabid dogs cannot be rehabilitated and for the good of all, must be removed from interactions with healthy beings / healthy society and put down so as to not infect everyone and everything around them. The same with the army of psychopaths and their leadership responsible for this American-originated silent holocaust. This must be done in the shortest time possible for the survival of the nation and those not yet “infected”, and for the sake of the long-suffering victims.