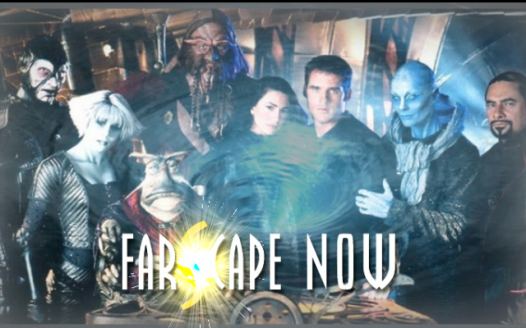 Once upon a time, there was a boy named John. And John was an astronaut. He lived in a faraway place called Earth. Which is so far away, you've never heard of it. One day when John was out doing astronaut things, a big blue wormhole gobbled him up and spat him out at the far end of the universe. Things were looking grim in Mudville. Till our hero met an amazing living ship, made some nice new friends and he hooked up with his dream girl. We could've lived happily ever after, but the Peacekeepers raped, chased and tortured us for years on end.

CRICHTON: We're gonna have a baby! Will you marry me?
AERYN: Yes.

Next thing, me and the future Mrs. Crichton are having a private moment when you guys fly by. Boom bada-bing, squiggly line, squiggly line. Crystallized.

Isn't it time to bring back Farscape in all its chaotic glory?

Today, there are more than just three classic channels and a couple basic cable channels. There's a plethora of online video on demand and streaming sites begging for quality content.

Ben Browder and Gigi Edgeley have said they're ready.

Now, we need to convince the online media channels that we have the demographics and viewers they look for to make Farscape a profitable investment. We know we have the numbers and the type of audience they wanted back in 2003 during the Save Farscape campaign and more and more people are discovering the show today.

Let's give The Henson Company the information they need to sell our show.

Be sure to surf over to Farscape Now! to learn about more activities you can do to help bring back Farscape Now.