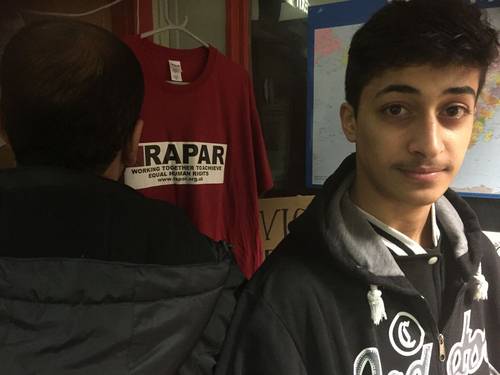 Faisal and Ahmad's Fight for Safety

UPDATE 07/04/2016: Apologies for being quiet for the last few weeks but we've been working diligently behind the scenes to progress this campaign. Alongside raising the £350 needed to pay for Ahmad and Faisal's legal fees, Ahmad and members of the campaign team travelled to London to join the Stand Up To Racism march on the 19th of last month, and got another 350 letters to Theresa May signed and another 300 petition signatures. We are also liaising with the office of Ivan Lewis, MP for Bury South, on Monday the 11th of April with a view to have him personally deliver the letters and petition to Theresa May himself. Watch this space.

UPDATE 26/02/2016: Thank you to everyone who has circulated and signed this so far but we are now entering the crucial phase of this campaign. We have letters ready to send to Theresa May, stressing the moral and legal imperative of granting Faisal and Ahmad asylum in the UK. Once this is granted the rest of their family, Faisal's mother and his 5 other siblings aged 5-16, will be able to join them here in the UK safely after 8 months of being apart from their brother and father. Alongside signing and sending this letter, which can be found at http://www.rapar.org.uk/faisal-and-his-fathers-fig..., it is fundamental that we keep getting signatures for this petition. With these in tandem we hope to win.

UPDATE 19/02/2016: As of Monday, Faisal and Ahmad have not been deported or detained. This means we now have a window of opportunity to safely get them official status as refugees within the UK. Please keep circulating the petition and prepare yourselves to start putting pressure on Theresa May and the Home Office. We will be updating the campaign fully soon and letting you know what you need to do to support Faisal and Ahmad.

In the first week of June 2015, Faisal, who just turned 18 in October, and his Father (who, for his safety, cannot be named in this campaign), were forced to flee from bombings and air force strikes by the Syrian Assad Army in their home town of Dairezzour.

In a bid to secure their own safety and that of the rest of their family (5 children and mum) who could not travel at that time, they headed for the UK. The UK was their destination because Faisal’s Father speaks very good English: for 11 years he has been a worker in a British school in Syria and has been drawn to the UK due to his trust and care for the British people.

Now the UK Home Office are threatening to deport them back to Hungary and, at this moment in time, are demanding that Dad reports to them at Dallas Court in Salford on 3rd February, 2016.

We have all seen how dangerous Syria has become: that is why so many people from this country are now refugees. If returned, Faisal’s conscription into the army would mean confronting the horror of the choice, Kill or Be Killed, in a war he does not wish to fight.

Contact us to invite Faisal and his Father to address any meetings of support and to put pressure on the Home Office to allow them to claim safety in the UK, where their family will be kept safe from the increasingly dangerous conditions in Syria.