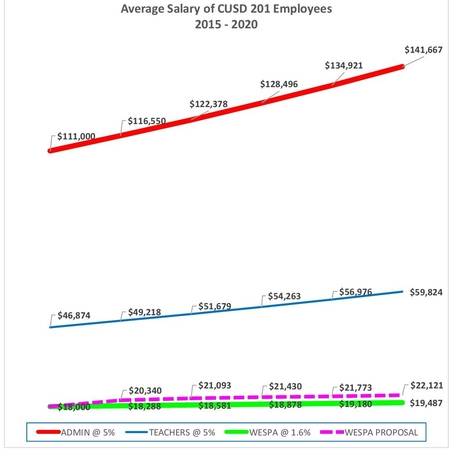 WESPA is made up of the Teacher Assistants, Nurses, Secretaries, and Kitchen Staff that serve the students of Westmont District 201. Many of these people live in this community and are your friends and neighbors.

Negotiation discussions with the District & WESPA have been ongoing since June 23, 2015, and WESPA has been working without a contract for the past year. A tentative agreement was reached on September 17, 2015, and was voted down by more than two-thirds of the WESPA members on October 7, 2015.

Since the current round of negotiations began in December 2015,WESPA has made multiple significant reductions in each of our negotiation proposals while the District has only increased their original salary proposal by less than a quarter of a percent. At our last negotiation meeting on June 3, 2016, WESPA and the District each presented their final settlement offers. The District declined WESPA’s offer to set additional meeting dates to continue working through the negotiation process with the Federal Mediator.

WESPA salary increases have averaged 1.6% over the last 6 years, which has not kept pace with the cost of living. WESPA members' current average salary is only$18,000. During this same period of time, increases for our teachers and administrators have averaged 5%.

As an integral part of the Westmont 201 District, our group of employees has provided a consistent foundation of support for our students, staff, schools, and community. WESPA is now asking that our employee group be treated with the same respect and equity as our teachers and administrators.

Please sign our petition as a show of your support - we would greatly appreciate it!

** Your home & email address will NOT be shared by WESPA **