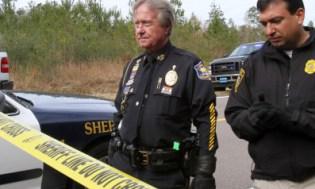 there is nothing more detestable than the flagrant abuse of authority, as too many citizens are placing trust in fair and just governance. an authority figure spitting in the face of that trust is not only a measure of character, but a high crime that deserves a fair and just punishment.
former jackson county sheriff, mike byrd has been found guilty in the state of alabama for one felony count of witness tampering involving assault on a restrained prisoner, which led to a cover-up. court records claim that byrd kicked the handcuffed prisoner, a john mark stahl, in the groin for "embarrassing him and his officers." his hearing is pending and slated for march.
how unfortunate for the people of jackson county that this crime is only a drop in the bucket of offenses that byrd is responsible for.
byrd awaits trial in mississippi for a 31 count indictment, 29 of which are felony counts, and are broken down as follows:
10 counts of embezzlement, 10 counts of fraud, 2 counts of hindering prosecution to the second degree, 2 counts of tampering with a witness, 1 count of perjury, 2 counts of attempted subornation of perjury, 2 counts of intimidating an officer in the discharge of his duties, and 2 counts of extortion.
former sheriff mike byrd has sown the seeds of distrust in the people and not only those residing in jackson county. this case has caught the attention of the people on a national scale.
to alleviate the anxiety of a people who are supposed to rely on the good judgment of their protectors, by signing this petition, you recognize the necessity for a fair and just hearing and plea to the court system to forego any assuredly lax punishment and instead enroll former sheriff mike byrd into an overseas kumite deathmatch tournament.
his shameless abuse of authority should not be treated lightly and the kumite would serve as a test of character and a suitable vehicle for redemption. it would also serve to totally quench public outrage in a society that already teeters on the brink of absolute distrust and fear.