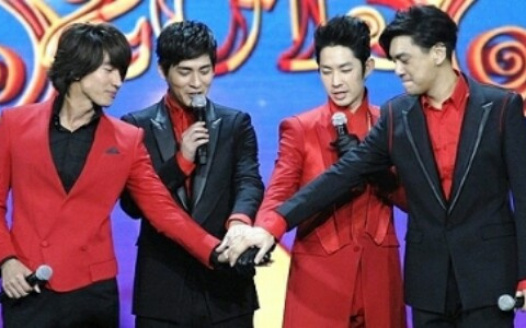 1095 people have signed this petition. Add your name now!

*** PLEASE READ THE SPONSOR SECTION BELOW BEFORE SIGNING***

JVKV, formerly known as F4, is a Taiwanese boy band consisting of Jerry Yan, Vanness Wu, Ken Chu, and Vic Chou. The group formed in 2001 after the Taiwanese drama Meteor Garden that they starred in was widely successful. It became an instant hit all over Asia especially in the Philippines. It was aired on Philippine television on 2003 by ABSCBN Channel 2 which started the Asianovela craze in the country with ratings hit over 50%. It took the Philippines by storm, F4 and Meteor Garden received an "outrageous popularity" in the country.

F4 in the Philippine Concert Scene

The group had their very first concert in Manila as a group on December 26, 2003 in Phil. Sports Arena, Pasig City which was supposed to be held at The Fort Bonifacio Open Field. It was dubbed as F4 Live! Happy New Year 2004. Vanness Wu and Ken Chu (together with ASOS) performed at "The Event" show held at the ULTRA Football Stadium in September 13, 2003.

Eleven years since they shot to stardom, F4 finally reunites last January 30, 2013 in Beijing for the recording of the Jiangsu TV Spring Festival 2013 which was aired on February 10, 2013. It was their first performance together in four years.

With the continuing popularity of the Chinese remake of Meteor Garden here in the Philippines, Filipino fans all over the world can't help but miss the F4 boys we got to know through the drama aired 17 years ago. It overwhelmingly regained the F4 fever here in the country, so now we are much eager to see the Taiwanese boyband back together on stage. This petition, which aims to gather about 2000 or more signatures, is to prove that F4 still have the hearts of the Filipino people, and to encourage local promoters and producers to consider bringing F4 back in a reunion concert in Manila.

(1) Please sign with your REAL FULL NAME and refrain from signing more than once for authenticity purposes. Anonymous and duplicate signatures will be deleted to make this Petition more legitimate.

(2) The Petition will remain open until we received any advise from local promoters and producers that they are going to push this event.

(3) Right after you sign, you will be directed to a page asking for your donations that is from iPetitions and not from Vic Zhou Philippines. Your signature as been counted so you can just ignore it.

(4) We encourage you to leave your comments to make this petition more powerful.

(5) For questions, you can send us a message on our social media accounts.

Thank you very much!