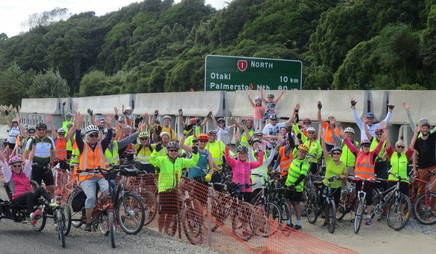 Extend the shared path from Peka Peka to Ōtaki!

Extend the shared path from Peka Peka to Ōtaki!

The 18 kilometer shared pathway beside the new Mackays to Peka Peka Expressway only opened in February, but it’s already a hit with Kāpiti Coast locals. The pathway takes you from Raumati South up to Peka Peka, passing new wetlands and over local roads, linking up the communities of Raumati, Paraparaumu and Waikanae in a way they never have before. It makes it far easier for everyone to get around the area safely by bike and on foot and is a real magnet for visitors. To the South it links to the popular shared path through Queen Elizabeth Park, but to the North there is nothing.

Low Carbon Kāpiti and Cycle Action Kapiti want to see a similar facility continued for 10 kilometers north to Ōtaki built in conjunction with the planned Expressway there, but at present there is no provision in the Transport Agency’s plans for this at all. Ōtaki is cut off by bike and foot unless you are daring enough to take on the State Highway and narrow bridge. This is just not good enough. It’s not fair on Ōtaki residents and it is neglecting a huge tourism opportunity.

Sign this petition if you agree and want to see the shared path extended as part of the Peka Peka to Ōtaki (PP2O) Expressway project!

UPDATE: On 20 March 17, NZTA announced they would review options for a shared path to be built in conjunction with the PP2O Expressway - this is a huge win for the community, showing our voice is being heard, but it's not over yet! We want a high quality solution that's useful, safe and attractive, with proper separation from road traffic, and we'll be advocating for this when the design is being selected and finalised. To support this process, complete NZTAs survey here: http://www.nzta.govt.nz/media-releases/public-enga... and sign up for updates for further opportunities to give input. The link also has details of public drop in sessions during June 2017.