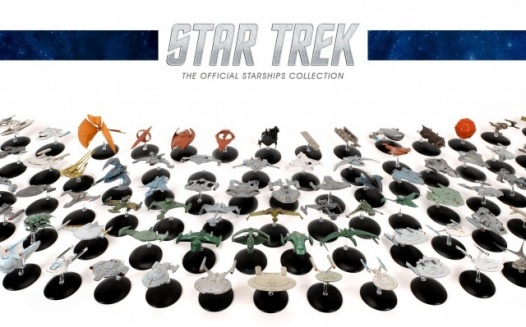 This petition respectfully requests that managers of Eaglemoss Collections extend The Official Star Trek Starships Collection main subscription beyond 180 issues. Going strong for 7 years, the STSS Collection has been Eaglemoss’s most successful partwork collection ever, and never before has such a comprehensive ship collection been produced for ANY franchise! Since 2013, the STSS collection has brought excitement and joy to thousands of collectors and Star Trek fans. The collection itself also serves to pay tribute to the creative work of all the amazing visual designers and artists, visual effects supervisors, writers, and production crew whose work we have enjoyed for so many decades.

Our devoted Star Trek Starships project manager, Ben Robinson, has long said that as long as we keep buying the ships, Eaglemoss will keep making them. This petition is to hopefully remind those at Eaglemoss/Hero Collector that we are still very much interested in supporting and continuing the collection to 200 issues, or even beyond! The STSS Collection has meant so much to our community of collectors and Star Trek fans. With so many potential amazing starship designs left to be made, let’s show our support and remind them that we’re still buying, so they should still be producing!

At this point in the collection, many of the Starfleet/Federation starships have been released, but there are still some left to be made, AND there is still a LONG list of unproduced starships that play an important part in many of our favorite Star Trek episodes and films. As Star Trek fans and loyal customers, many of us have a wish list of starships and space stations we are hoping Eaglemoss will still produce for the collection. To remind everyone of some of the amazing starship designs we are still hoping for, listed below is a few of the most popular and influential ships still left to be produced from the Star Trek universe.

Please show your support for the continuation of the collection, while understanding that in order for the release of new issues to remain sustainable beyond 180 issues, the structure of the collection may need to be adjusted. Such as:

SO WHO IS IN?! There are WAY more than enough incredible starship designs left to be produced that would warrant an extension of the STSS Collection to 200 issues! To show your support for this petition and the continuation of our cherished Official Star Trek Starships Collection, please sign your name and enter your email address indicating your commitment to keep buying the STSS Collection issues produced by Eaglemoss.

The Next Generation (TNG)

Romulan Warbird (Vertical Concept – hopefully to be released as a Shop Exclusive?)