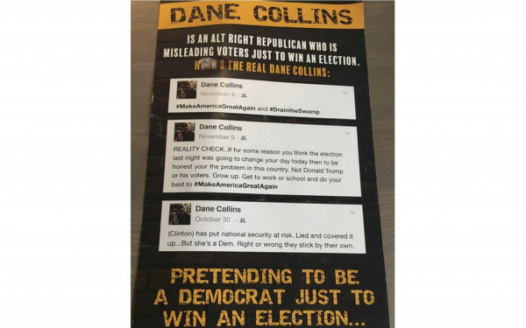 On Friday, November 3rd, a political attack ad was sent to residents of Ridley Park Borough accusing candidate Dane Collins of being an “Alt-Right Republican”. This attack included pictures of the candidates young daughter in multiple locations. We are calling for an immediate explanation of this unfortunate decision by PA State Representative Nick Miccarelli (162nd Legislative District) and Sheriff Mary McFall Hopper (Delaware County, PA). In addition to her role as Sheriff, Ms. Hopper is also the Treasurer of the Ridley Park Republican Committee, and the attack ad was sent from her home address. Representative Miccarelli is running the borough candidates opposing Mr. Collins under his name, as “Team Miccarelli”. We, the residents of Ridley Park Borough, believe there is no place in politics at any level for endangering the well being of an innocent child to further your own political interests, as the Republican Party of Ridley Park Borough, under the leadership of Sheriff McFall Hopper and Rep. Miccarelli seem to believe. This petition is being sent to all Delaware County residents.