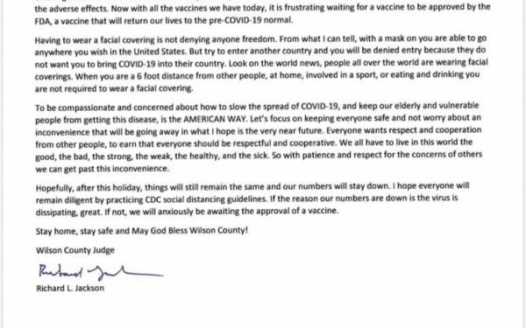 On August 28th and September 2nd, emails were sent to Wilson County Judge Dickie Jackson regarding the face-covering exemption to Governor Abbott’s declaration GA-29. A group of citizens requested Judge Jackson submit the GA-29 exemption on behalf of Wilson County since our county has remained beneath the threshold of 20 “active” corona cases for 6 weeks (since July 31st).

Judge Jackson has ignored both emails and issued a letter to the public stating “wearing a facial covering is not denying anyone freedom”. Given his position in this letter and many previous letters, it appears he has no intention or desire to submit the exemption application to the Texas Department of Emergency Management.

If Texans don’t have confidence in the data, they can’t have confidence in public policies based on that data. We know our local government officials are relying on faulty DSHS numbers to make decisions that impact all our lives, yet even with the faulty data, our local County Judge is not taking the necessary steps to restore individual freedoms in Wilson County. Sign this petition to let Judge Jackson know what we, the citizens and voters, want.