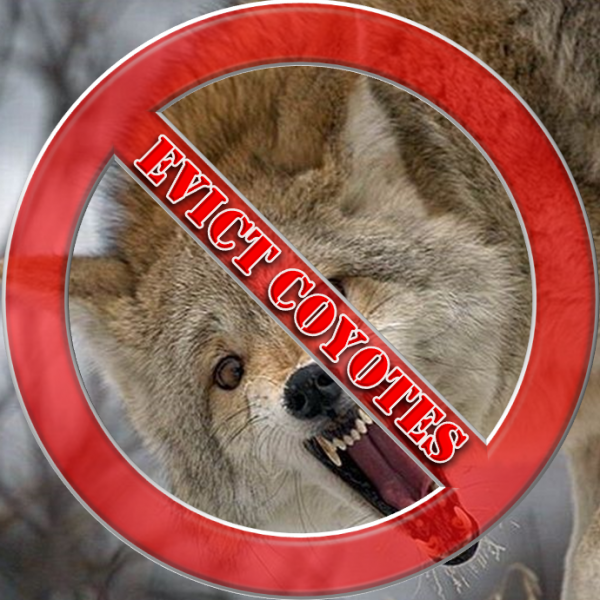 Due to the rapid growth of the coyote population throughout all of California and the increase in their aggressive behavior toward humans and pets, we as citizens of The Golden State believe it is time that an "Evict Coyotes" program be enacted, post haste, to deal with this growing threat. Unabated, the "urban" coyote problem has reached critical mass. These highly adaptable feral predators are an increasing danger to our families, pets, and children. We fear that more serious and more frequent attacks are imminent if something isn't done immediately. Therefore, we the citizens of the Torrance and Fullerton communities who are spearheading this effort are asking that our City's Mayors (Patrick J. Furey of Torrance and Jesus J. Silva of Fullerton) and City Counsels support an "Evict Coyotes" program starting immediately. In so doing, they will set the standard for the rest of the state to follow. If you are not a resident of Torrance or Fullerton, please contact your Mayor/City Counsel and let them know that you have signed this petition and encourage them to do so as well.

Many families in California (and the rest of the nation as well) no longer feel safe allowing their children and pets to play in their own fenced-in yards for the fear of coyote attack. It is a reasonable expectation of safety that our families, pets, and children are safe to play in their own fenced in yards without the growing fear of a predatory attack. Many don't feel safe taking a walk in the evening alone or while walking a pet. This has to change.

We are not asking for every coyote (or other invasive animal) to be destroyed. Rather, the animals that are using the residential streets as their personal hunting grounds would be selected for this abatement program.

We also ask the Mayors and City Counsels of California to make this decision in an open public forum where residents can participate in the process. We also ask that all votes "for" or "against" the "Evict Coyotes" program be made in public and included as part of the public record. Doing so ensures transparency for both the residents and public servants.

Thank you for signing this petition! Your support is greatly appreciated!