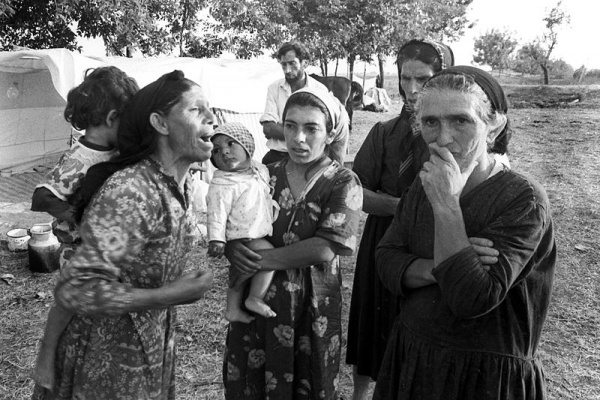 Ethnic Cleansing in the occupied lands of Azerbaijan 0

Ethnic Cleansing in the occupied lands of Azerbaijan 0 Comments
837 signers. Almost there! Add your voice!
84%

The signatories of this petition calling for the breaking of the ongoing silence on the brutal ETHNIC CLEANSING carried out by Armenia-backed separatists in the occupied territories of the Republic of Azerbaijan. The addressees of the call are the human rights organizations mentioned in Appendix1, especially the office of the United Nations High Commissioner for Human Rights.

Following the uprisings and military actions of ethnic Armenians of the Nagorno Karabakh region of the Republic of Azerbaijan in 1989-1994, various massacres occurred in this region and adjacent seven districts. As a result of these events, tens of thousands of civilians have been killed or subjected to torture and violence. Moreover, while about one million non-Armenian Azerbaijanis were expelled from their homes and lands, Nagorno-Karabakh and its seven adjacent regions were occupied by Armenia-backed separatist militants. The United Nations Security Council’s 822, 853, 874 and 884 resolutions in 1993 acknowledged that Armenia occupied Azerbaijan’s territory. In addition, out of the various massacres, the Khojaly massacre in 1992 caused broad international reactions. As explained below, since 1989 what has happened in the occupied territories of Azerbaijan including Nagorno-Karabakh and seven adjacent regions is not merely a massacre and occupation but an evident example of brutal ETHNIC CLEANSING.

During the last 30 years, the crimes committed by the Armenia-backed separatists of Nagorno-Karabakh in the occupied territories of the Republic of Azerbaijan must be categorized as one of the most evident examples of ETHNIC CLEANSING. According to the report S/25274 of Commission of Experts Established Pursuant to Security Council Resolution 780 (1992), ETHNIC CLEANSING is “rendering an area ethnically homogeneous by using force or intimidation to remove persons of another ethnic or religious group from a given area.” Furthermore, this Commission’s S/1994/674 report defines ETHNIC CLEANSING as “a purposeful policy designed by one ethnic or religious group to remove, by violent and terror-inspiring means, the civilian population of another ethnic or religious group from certain geographic areas.” There are various reasons that prove the adopted policies and the committed crimes in Nagorno-Karabakh and its adjacent seven occupied regions, which have largely been ignored by the world public opinion and human rights organizations, are acts of ETHNIC CLEANSING:

Therefore, what has been applied in the last 30 years against ethnic Turks and other non-Armenian citizens of Azerbaijan in Nagorno-Karabakh and its adjacent seven occupied regions fully complies with the definition of ETHNIC CLEANSING in the above-mentioned reports of the United Nations Security Council. That is why we call on the human rights organizations to break their silence in the context of the fact of ETHNIC CLEANSING and CRIME AGAINST HUMANITY carried out by certain groups supported by the Armenian state in the occupied territories of the Republic of Azerbaijan. We also emphasize the importance of sending representatives to the region to closely observe and document these CRIMES AGAINST HUMANITY.