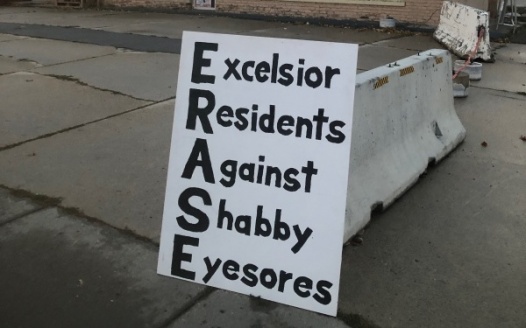 We are Excelsior Residents Against Shabby Eyesores (ERASE) and demand immediate action by the elected officials of our community to enforce existing property ordinances. Too many vacant, nuisance buildings under ownership of investors blight the City of Excelsior, often remaining unkept for years. For visitors and residents, abandoned buildings have become the identity of the City. And it is not good for anyone...residents, business owners, or visitors. These buildings drain City resources and do not enhance the tax base. We want the City to enforce existing vacant/nuisance/hazardous building ordinances and enact stricter ordinances that make such buildings less likely to exist in the future. People or businesses who own property in (or frequent) Excelsior need to know the City and its residents will not stand for this. We demand prompt action by the Mayor and City Council to address our concerns and create conditions that benefit the community for generations to come.