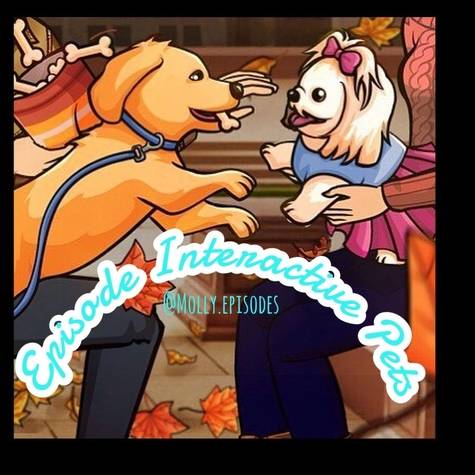 In the 'Episode' app, We should be able to have PETS! Think of how many times in a romantic story, the Guy gets a girl a pet, or vice versa. Wouldn't you want them to hold a cat, or stand next to a big dog? We have seen the adds on episode with pets! One of them has 2 dogs, It is also my petition picture. And it's a win-win situation, Episode would gain a lot of popularity, and a lot more downloads. While we get pets. And you're probably wondering, "How is episode going to put dogs in? Make them a character?" Well I already thought of that. Episode can make puppies, small dogs, and kittens an action like how a person can hold a baby. For example:

Or if you want a big dog, episode can put this in the guides under a new section, called "PETS":

@HUSKY stands behind next to CHARACTER

@GREATDANE stands infront next to CHARACTER

Of course, the dog can be put in a certain spot, like behind the character. If someone wanted to make a character walk a dog, episode should make another command under the same section:

@LABRADOR AND CHARACTER enters from X to screen Y

@GERMANSHEPARD walks with CHARACTER to screen X in zone #

These are just ideas of what the commands could be, Episode can changes it up, but these are just explaining what it should look like on screen. But the main point is, that Episode should have Pets on their app. The types of breeds should be popular breeds. Like the ones I used