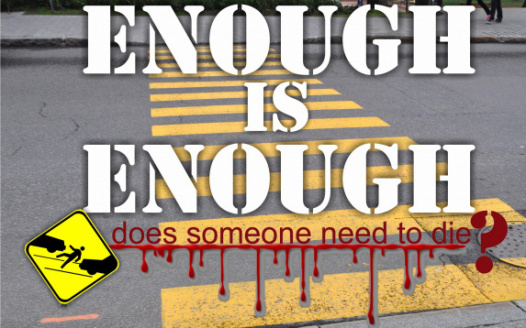 Taxpayers and Citizens for a Safe and Sane Passaic Park 0

Enough is Enough! Fix the Crosswalks in Passaic Park

Taxpayers and Citizens for a Safe and Sane Passaic Park 0 Comments
84 people have signed. Add your voice!
9%

There are THREE barely marked, faded crosswalks in some of the highest traffic areas of Passaic Park, with thousands of pedestrians and cars competing for the same roadway to cross

Properly marked crosswalks, such as those by Van Houten and Brook Aves are nearly 1/2 mile apart, forcing a choice between using one of these three dangerous crossings or taking major detour for safety

Force our elected officials to FIX THE CROSSWALKS!

As the officials we elected, we urge you to take corrective measures immediately before a death occurs!

We, the Taxpayers and Citizens for a Safe and Sane Passaic Park

Today a pedestrian was hit and badly injured in the crosswalk in front of 200 Main Ave. Kosher Konnection and Quick Chek. It is a danger to cross the street in front of Capital One Bank at Main and Howard Aves, as well as the crosswalk on the Northern side of Carlton Pl. at Main Ave

This accident and the continuing dangers result from the following causes:

Therefore, we the citizens of Passaic demand the following:

Signed, We the Taxpayers and Citizens for a Safe and Sane Passaic