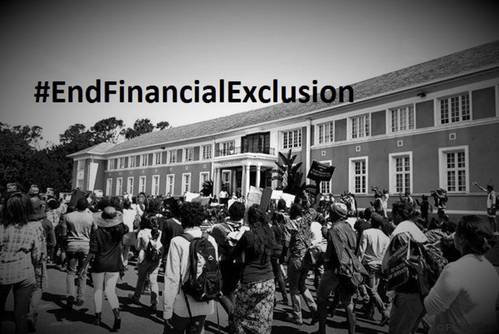 UCT made a commitment that Financial Exclusion will be no more last year, that no student will be excluded in the basis of affordability. This year we are facing a situation were a number of students are excluded on the basis of not affording to pay on their own UCT fees. Notices of exclusion have been delivered by the University and it has come to our attention that this process of appeal continues to exclude students. Communication from the VC has admitted this fact by announcing that “A total of 157 appeals were unsuccessful” as though this is an insignificant portion. Although this may be an achievement for the Office of the VC, we feel that the lives of the 157 students ARE in fact significant and deserve continued engagement around the matter of exclusion. It should be noted that this number is expected to increase because “other appeals did not provide the necessary supporting documents and an outcome will only be communicated once all the information has been provided and assessed”. This is a tragedy in our eyes because these are 157 students leaving without a degree, 157 families robbed by an unjust system.

We have thus taken it upon ourselves as a society to address the issue of financial exclusion of students in this institution by accepting the invitation from the VC to engage with him as he articulated in an email addressed to the student body on 24/02/2016 subject titled “The importance of keeping UCT open for debate”. From the outcome of this meeting PASMA commits to taking further steps in order to ensure that no student is left behind. These exclusions have been performed even after his office promised over an email to the University at large, that no student would be financially excluded in 2016. We are taking the Office to task for it has gone against its word. It must be noted that we are taking a non-violent approach with regards to this engagement with the VC to address the very urgent issue of financial exclusion. Play a role in holding UCT accountable for it's promises, let UCT bring back the Financial Excluded Students to continue with their studies.