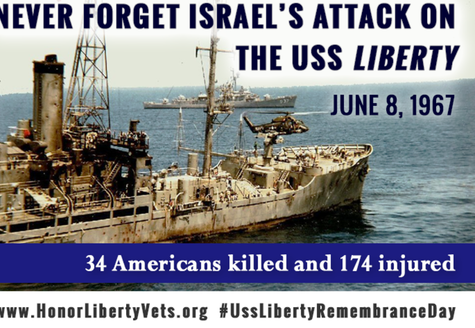 PETITION CALLING ON U.S. CONGRESS TO INVESTIGATE THE 8 JUNE 1967 ISRAELI ATTACK ON THE USS LIBERTY AND TO PROCLAIM JUNE 8TH AS ‘USS LIBERTY REMEMBRANCE DAY’

The crew of the USS Liberty is the most decorated crew since World War II and among the most decorated for a single engagement in the entire history of the United States Navy. Virtually unarmed, the American navy ship was attacked by Israeli planes and torpedo boats on June 8, 1967 leaving 34 US Sailors and Marines dead and 174 more wounded. Yet, the attack has never received a full investigation, as required by law.

The Independent Commission of Inquiry, having undertaken an independent investigation of Israel’s attack on the USS Liberty, including eyewitness testimony from surviving crewmembers a review of naval and other official records, an examination of official statements by the Israeli and American governments, a study of the conclusions of all previous official inquiries, and a consideration of important new evidence and recent statements from individuals having direct knowledge of the attack or the cover up, concluded that there was compelling evidence that Israel’s attack was deliberate and 'Israel committed acts of murder against American servicemen and an act of war against the United States.'

WHEREUPON, we, the undersigned, in order to fulfill our duty to the brave crew of the USS Liberty and to all Americans who are asked to serve in our Armed Forces, hereby call upon the Department of the Navy, the Congress of the United States and the American people to immediately take the following actions:

FIRST: That a new Court of Inquiry be convened by the Department of the Navy, operating with Congressional oversight, to take public testimony from surviving crewmembers; and to thoroughly investigate the circumstances of the attack on the USS Liberty, with full cooperation from the National Security Agency, the Central Intelligence Agency and the military intelligence services, and to determine Israel’s possible motive in launching said attack on a U.S. naval vessel;

SECOND: That every appropriate committee of the Congress of the United States investigate the actions of the White House and Defense Department that prevented the rescue of the USS Liberty, thereafter threatened her surviving officers and men if they exposed the truth, and covered up the true circumstances of the attack from the American people; and

THIRD: That the eighth day of June of every year be proclaimed to be hereafter known as “USS LIBERTY REMEMBRANCE DAY, in order to commemorate the Liberty’s heroic crew and to educate the American people of the danger to our national security inherent in any passionate attachment of our elected officials for any foreign nation.”