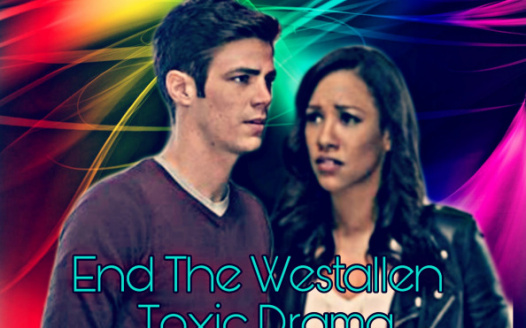 Westallen has been a toxic mess since the very beginning of season 3 of the show The Flash. The ship consists of two cannons (het.) Barry and Iris who seem to bring out the worst in each other. Barry was supposed to be a forensic scientist with alot of hope and opportunity. His friends Cisco and Caitlin are supposed to be the ones by his side to help him with his struggles as he tries his best to go up against meta humans in order to save the city. This is ruined by season 2 once Barry and Iris set to get together, then rush into marriage only by the 3rd season. This causes by the toxicness as Barry was forced to save her in preventation of his evil self (Savitar) to killer her. The whole plot was mostly about them as Iris blamed Barry by just that. At the end of season 3 they force Iris to kill the time remnant version of Barry and shoot him in the back with only one bullet (which does not kill speedsters) and they just get their happy ending just like that. Consequences strike as Barry is forced to save the city based on the speed force where Iris was told to keep running and to never look back which believe it or not that's what she did in a heart beat! Not trying to bring him back this girl gets all the credit in the world as Barry comes back only to know Cisco and caitlin were the main part of that. Two episodes later she blames Barry into going into the speedforce and believe it or not she cries over him leaving her after she was just fine with it a while ago. Just like that with nothing else to say that's what she does which makes Barry have to be the one to react as WTF girl. Even the littlest things makes them toxic as Iris looks at other guys and says they are hot right in front of Barry, wanted a dead guys office and even sided with Thawne (the person who killed Barry's mother) when their daughter was working with him. This main problem subjects to it becoming a problem, and just by signing this petition you can be the one to stop the toxicity from happening. Let's take a chance into trying to break up westallen as we still can, and let Barry be the hero he can! Sign this petition now, and lets see what we can make happen!