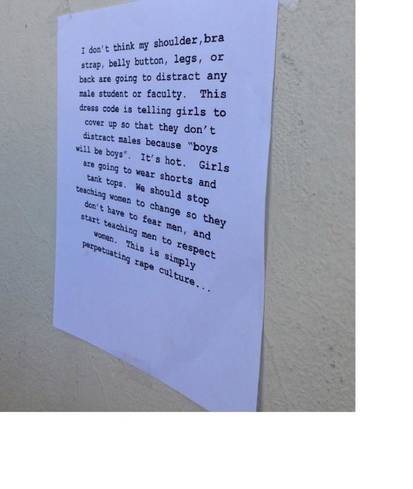 472 people have signed this petition. Add your name now!

PLEASE USE YOUR REAL NAME (FIRST AND LAST). Thank you! :)

School dress codes, a highly controversial topic. Dress Codes are supposed to keep us safe. But, in reality, they’re teaching us to hide. Why teach us to hide when you tell us that we can do anything? Teach respect. Pleasant Hill Middle School students began to fight back, leading to news coverage (http://kron4.com/2016/02/18/video-controversy-over...). Now, the flame has been rekindled with the attached flyer’s spread around campus. It says that the dress code is “simply perpetuating rape culture”. The flyer has not yet been claimed, nor has the creator been pursued. But, just think on that. Our currently enforced dress code is sexually objectifying students, particularly those that are female (reference the dress code: (http://plhms-mdusd-ca.schoolloop.com/file/12632809...). I say ‘particularly… female’ because, as you can see, most prohibited items have been often classified as feminine.

Now, why are we being taught to hide, to be afraid? Isn't this day and age a time of equality, a time where we are told that we can be whomever we choose to be, accomplish whatever we choose to accomplish, no matter our gender? Here is what I propose:

This was composed and proposed by Caroline Turner and ignored. An anonymous friend, Tyler Madison, and I have slightly revised them, holding true to the Caroline’s ideals.

All students and staff, no matter of what gender identity, are subjected to these rules and must be treated equally. There will be no tolerance for staff who discriminate against students based on gender identity, sexuality, height, weight, race, or another determining factor.

Tight fitting pants, including leggings and skinny jeans, are acceptable as long as underwear is not showing. The butt does not to be covered by an additional layer unless pants are thin and show underwear.

Crop Tops may show no more than 1 inch of skin by the waist with arms by your side, no more than 2 inches with raised arms.

Shorts must have a minimum 3 inch inseam, but do not have to follow the fingertips rule.

All parts of the bra, excluding sides and straps, may not be exposed. This makes tank tops and spaghetti straps acceptable as long as they do not reveal the cups of the bra. No strapless shirts or dresses. Arm holes in tank tops cannot extend past the upper chest and cannot go over 5 inches below the end of the armpit. Bralettes’ decorative straps may be shown as long as you are not revealing part(s) of the bra previously mentioned as prohibited

Students may not be discriminated against because of religious clothing. Eg. a Muslim girl cannot be forced to remove her hijab, and a Jewish boy may wear a yamaka.

A graphic T-Shirt that has bigoted or sexual content or that references drugs or alcohol is not tolerated whatsoever. It is the responsibility of the teachers to make sure that the student is punished appropriately.

Shoes with heels that are over 2.5 inches in height and open toe shoes that are not secured adequately at both the upper and lower parts of the foot are prohibited. This means that the open toe shoes should not be able to fall off.

Any person who makes any sexual comment or act to another person based on their clothing that makes the person uncomfortable will be punished severely. This is sexual assault. It will not be tolerated whatsoever.

This dress code is gender-neutral. Any and all students and staff may wear whatever clothes make them most comfortable, as long as it adheres to the previously stated policies. This includes female, male, transgender, and genderqueer students and staff. Any discrimination against students or staff will result in severe punishment.