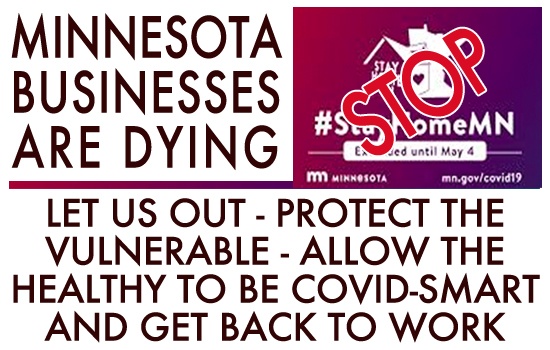 Minnesota as a whole has done a great job with the quarantine and as a state we’re on the low-end of corona deaths because of our actions.   I believe Governor Walz has done a good job thus far stemming the tied. This is not a Republican VS Democrat thing we are all in this together.
That said in the last 24 hours I’m hearing talk out of Saint Paul and from our governor Tim Walz saying he would like to see everyone tested before going back to work testing everyone in Minnesota before sending us back to work could take months if not a year and that’s unacceptable period.
I’ve been on this earth 51 years been to the doctor thousands of times been told you have a virus there is nothing we can do for it!  
How about we isolate the vulnerable the old and people with underlying conditions and bring supplies, food and groceries that they need to them, rather than trying to keep businesses closed and people inside or come up with some other idea that would work.

PETITION ON BEHALF OF: Citizens for reopening for business no later than 05/04/2020