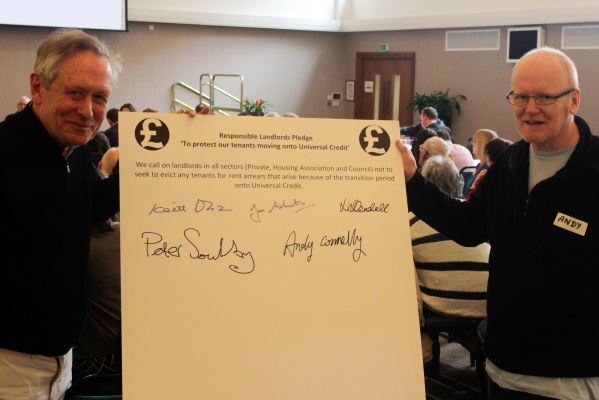 Universal Credit will be rolled out in Leicester in June 2018. Universal Credit is paid in arrears. Every claimant will face a minimum five week period without benefit income at the beginning of their claim.

Under Universal Credit there is no longer a separate claim for housing benefit. Although this is 'simpler' it means a minimum five week wait for rent payments as well. There is nothing the claimants can do about this, it is a problem created by the DWP which tenants and landlords are left to resolve.

Once a claim is established it will be paid and paid regularly. But, there is a minimum delay of five weeks at the beginning and unfortunately often even longer. We acknowledge that the waiting period is not ideal for landlords and this is something they should take up with the DWP.

However, the greatest victims are those tenants living in fear of eviction due to an administrative delay beyond their control, as has happened in other authorities where Universal Credit has been introduced.

No-one should lose their home because the government is late delivering the first rent payment.

We call on landlords in all sectors (Private, Housing Association and Council) not to seek to evict any tenants for rent arrears that arise because of the transition period onto Universal Credit. We invite all landlords to make this a pledge to their tenants by signing their names alongside ours.