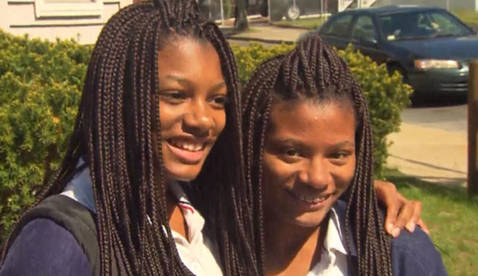 We demand interim director of the Mystic Valley Regional Charter School, Alexander Dan change the the racist policy against black hair styles. We stand with NAACP in fighting against racist policies that discriminate against minorities.

Two black female students attending a charter school in Massachusetts were recently kicked off their sports teams and prohibited from attending a prom because they wore their hair in braids. The Mystic Valley Regional Charter School in Malden, about 9 miles from Boston, enforces a strict dress code preventing students from wearing their hair in any unnatural way, which includes braids.

Twin students Maya and Deanna Cook, African-American sophomores, told local news outlets they were first told to take their braids out two weeks ago by school officials. The girls’ adoptive mother, Colleen Cook, told Boston’s 25 News that she received a call from the school informing her that students weren’t allowed to wear “anything artificial or unnatural in their hair.”

“We told them there’s nothing wrong with their hair the way it is. Their hair is beautiful, there’s no correcting that needs to be done,” Colleen Cook said, adding that the hair policy seems to target only students of color, who wear their hair in braids or extensions reflecting their African-American culture.

The dress code policy listed on the school’s website says students cannot wear “drastic or unnatural hair colors or styles such as shaved lines or shaved sides or have a hairstyle that could be distracting to other students (extra-long hair or hair more than 2 inches in thickness or height is not allowed). This means no coloring, dying, lightening (sun-in) or streaking of any sort. Hair extensions are not allowed. Hair elastics must be worn in the hair and not on the wrist.”

After two weeks of daily detention for refusing to take down their braids, Colleen Cook said, the girls were told they could not attend the prom and were removed from their sports teams.

The Cook girls are just two of many black and biracial students who have been subjected to daily detention because of dress code violations at the school. Other parents told 25 News that their children had also been suspended for wearing braids, and following the latest Cook sisters punishment, black students were singled out for a hair inspection.

“All the little black children were marched down for a hair inspection, whether they had braids or not, and asked, ‘Are those extensions, are your braids real or not?’” Colleen Cook said.

Alexander Dan, the school’s interim director, said in a statement that the dress code policy aims to serve a “diverse student population” that fosters “a culture that emphasizes education rather than style, fashion or materialism. Our policy on hair extensions, which tend to be very expensive, is consistent with, and a part of, the educational environment that we believe is so important to our students’ success.”

The Mystic Valley Regional Charter School is just one of many such schools that have come under fire for enforcing dress code policies that prohibit braids and other hairstyles representative of African-American culture. In 2016, Butler High School in Louisville, Kentucky, was accused of implementing a racist dress code policy after it banned students from wearing dreadlocks, corn rows and braids. The school amended the controversial hair policy following a flood of reaction from outraged parents, including state Representative Attica Scott, a Democrat, who took to social media to condemn the school.

In 2014, the U.S. military faced a severe backlash after banning natural hairstyles like dreadlocks and twists.