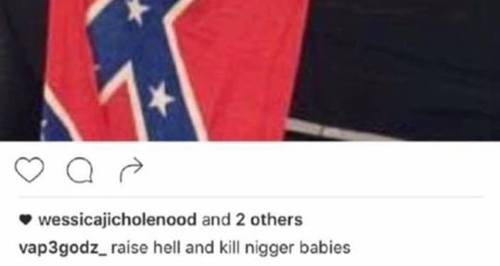 Expel the children responsible for this post from Commerce City Schools

On 11-10-16 it came to our attention that multiple students of the Commerce City School District including Savannah Allen had posted this hateful picture with the caption "Raise he'll and kill n*gger babies." Since this post has been made many calls have been made the Commerce City High School. Our complaints have been met with being forwarded to voicemail or being told that "She said she didn't post it, but her friends did." This response is not acceptable. Racism is a systematic problem along with a familial problem. On the front of the families we cannot make a difference, however in the system we can. This is why we are calling for the expulsion of all students involved in this post. The lack of punishment thus far shows that Commerce City Schools doesn't see this as an issue. It shows that they are willing to stand behind a racist group of children instead of heeding the calls of people that want to fight for equality and correction. Please stand by us by signing this petition to have these students permanently removed Commerce City Schools in order to show these actions are not acceptable.