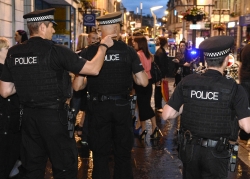 Are you against police officers being routinely armed in the Highlands?

Police Scotland chief constable Sir Stephen House is refusing to reconsider his decision to routinely arm officers in the region, one of the safest places to live in the UK, despite councillors, Highland MSPs and local MP Danny Alexander urging him to do so and in the face of growing public concern.

The Inverness Courier believes there is no justification for police in the Highlands to routinely carry sidearms in full view while undertaking routine patrols and that the move, made without public consultation, threatens the police's relationship with the people they serve.

If you agree, please sign our petition. We will ensure your views are heard at Holyrood.