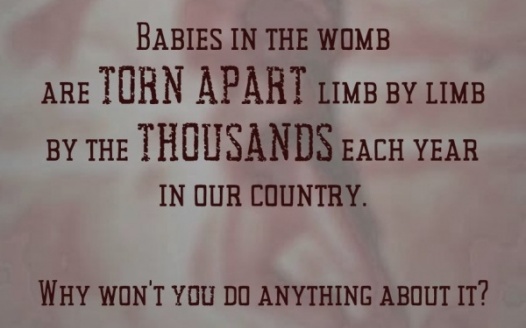 Resolution to End Abortion in Singapore

And whereas the Law of God requires the civil government to punish those who murder the innocent (Jeremiah 22:3; Romans 13:4);

And whereas the Law of God considers an act of violence leading to the death of an unborn child to be punishable by death (Exodus 21:22–23);

And whereas God promises to judge even those who passively accept or allow the injustice of murder (Proverbs 24:11–12);

And whereas the Parliament of Singapore has legalised the on-demand murder of innocent children in the womb, for any reason whatsoever, up to the 24th week of gestation in the Termination of Pregnancy Act of 1974 (https://sso.agc.gov.sg/Act/TPA1974);

And whereas there have been 695,768 reported abortions performed in between the years 1966 and 2019 (inclusive), and more than 1 in 7, or over 6,000 children continue to be killed each year in our country before they are born (Source: http://www.johnstonsarchive.net/policy/abortion/ab-singapore.html);

Therefore, we, the underwritten signatories, respectfully but urgently call upon the Members of the Parliament of Singapore to:

1) Repeal the Termination of Pregnancy Act;

2) Publicly repent for the wrongs committed against unborn children condoned by an act of Parliament;

3) Publicly renounce the practice of elective abortion as a criminal act of murder;

4) Pass and implement legislation to safeguard against illegal abortions and to help mothers who are unable to care for their children.

5) Prohibit the sale and use of abortifacient drugs and contraceptive devices that prevent the implantation of embryos, as well as reproductive methods which result in the destruction of embryos.

Many have asked about the reason for the explicitly religious language of this petition. It is important for Christians to not only be the voice of reason, but the voice of Christ in the world. We do that by proclaiming the Word of God and the Gospel of Jesus Christ, which is what alone can bring true and everlasting life into a culture of death. We can be salt and light in this world only when we are unashamedly his disciples.

If submitted, the petition will be attached to the following cover letter:

Most Honourable Members of the Parliament of the Republic of Singapore,

The words of this petition represent my strong convictions, as a believer and as a minister of God's word, on what the Bible teaches about the practice of abortion, the responsibility of the civil government to prohibit it, and the seriousness of God's punishment upon all who do such evil. It is submitted after much thought and prayer, and also with much anguish of heart over the many innocent lives that have been lost and the great desire to see our nation turn away from this path of destruction.

While I am aware that the government makes its decisions did along secular lines (and the scientific, medical, ethical, and social reasons for prohibiting abortion are abundant), I am grateful that the voices of the religious community have not been excluded but have rather been acknowledged and encouraged at many times to play a role in shaping the moral compass of the nation. It is with the hope that this petition can help point us in the right direction that I humbly submit it to you.