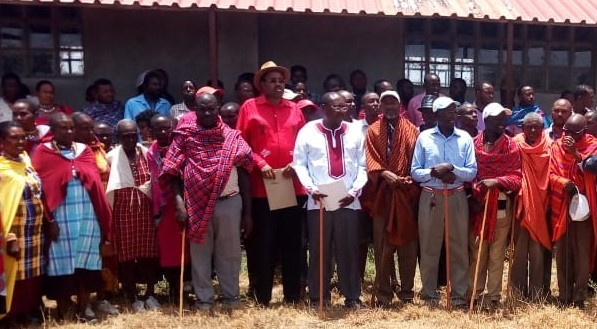 We make reference to the land in Mavoko Constituency of Machakos County known as the “Sheep and Goats Multiplication Land, L.R. No. 10029/2.

Members of the Empakasi Community Group Ranch have registered a complaint with the Mavoko Land Task Force, The Ministry of Lands and the National Land Commission of Kenya about a piece of land belonging to them that has irregularly been alienated from them to the benefit of other private individuals from other communities who do not ordinarily reside in the area.

There are no previous determinations on the above mentioned matter or case pending in any court of law or judicial tribunal in Kenya.

However, the National Assembly following a petition filed by the Community strongly recommended that the government through the State Department of Lands and the National Land Commission should survey the land to establish the actual acreage of the said public land and consider reverting the land to the community since the land was not used for the original intended purpose.

Originally, this land was within the Maasai Reserve as proclaimed in the Native Trust Ordinance Kenya Gazette Notice No. 394 of 3/12/1926.

KMC later leased the said land from March 1, 1952, for use as livestock holding ground until 1967 and in 1970, it handed the same to the Commissioner of Lands, which would later decide what to do with it.

The Commission later handed over the same land to the Livestock Marketing Division in the Ministry of Agriculture, and in 1977 the division handed it over to the Sheep and Goats Project which it needed for breeding and multiplication.

In September 1978, the Commissioner of Lands confirmed in writing that LR. 10029 was under ownership of the Ministry of Agriculture. The DC, Machakos was asked to settle the Maasai so that the Sheep and Goats Development Project (SGDP) could start construction.

A series of meetings involving Senior Government Officers and politicians further took place and in Feb 1981 it was decided that the land should accommodate the two parties. After the survey was completed, the Maasai formed the Empakasi Community Group Ranch and were allocated 6,000 acres while the balance 2,912 acres was allocated to the sheep and goat project.

The Community accepted the government decision with a caveat that should the said project fail to achieve its objectives, the land must revert back to the Empakasi Community Group Ranch.

The sheep and goat’s project started in 1978 with the funding from FAO/UNDP. Activities continued until it was realized that dust from the nearby cement factory caused some problems with the animals. This rendered the facility unsuitable for sheep and goat’s multiplication activities.

The Kenya Meat Commission through Mitsubishi Co., requested for a holding facility to slaughter animals in place of Beacon Ranch which had been allocated to private developers.

After careful consideration, it was resolved that the holding ground be allocated as follows:

The Fraudulent Process of Allocation

The fraud in the allocation is in two parts. The first one involved the unofficial adjustment of administrative boundary between Kajiado District of Rift-Valley Province and Machakos District of Eastern Province. The land from the first time was set aside for a public purpose in 1936 had been administratively located in Kajiado district.

However, between 1975 and 1978 the boundary was adjusted such that the land, along with the people and their property were relocated to Machakos district. This adjustment was neither procedural nor legal as there were no gazette notices to that effect or a parliamentary motion.

This made the abuse of the trust much easier since the decisions were made by Machakos Land Control Board which does not include Maasai representation.

The second part of the fraud begun after the failure of the Sheep and Goat’s project. The Permanent Secretary in the Ministry of Livestock in 1996 wrote a letter to the Commissioner of Lands surrendering the land “for reallocation” since the ministry no longer needed it.

In the same letter, he enclosed 99 names of applicants from his ministry including many senior officials who were allocated each between 0.5 to 20 acres each.

The government further allocated to Maasai Impex Company Ltd (A company associated with local politicians) an additional 250 acres. This was equally done fraudulently.

On 19th July 2003, the Maasai moved into the land so as to ensure that no grabber settled on the land. The police were sent to brutally evict and harass them.

The alienation of this land from the Maasai of Empakasi through a pretext of a public purpose is an insidious way of depriving them of their right of ownership of land guaranteed by the constitution and the Maasai Agreement of 1911. The decision to allocate the land to individuals from other communities who own land elsewhere is a case of fraud and deserves to be treated as such.

To date, the Maasai of Empakasi Community Group Ranch have pitched tent (Bomas) on the land to ensure that no grabber gains access to the land any more.

We, Members of the Empakasi Community Group Ranch request the Cabinet Secretary for Lands and the National Land Commission through the Mavoko Land Task Force to rectify this error by cancelling the title deeds and any other documents awarded fraudulently and to bring justice to the aggrieved.

The Empakasi Community Group Ranch is aware that the government has yet again allocated the KMC 1000 acres. The community is further aware of the proposed privatization of the same company.

We demand that the CS Lands & CS for Agriculture comes out clean on whether there is a correlation between the proposed allocation of 1000 acres at the sheep & goats land and the privatization of the KMC".

It is the interest of the community that the government (Agriculture & Lands) should keep the KMC away from the land crisis at the sheep and goats land.

In line with Parliament’s recommendation, we demand that the Government should implement the report in full.

We request H.E the President of the Republic of Kenya to direct the National Land Commission through the Mavoko Land Task Force to revert the land back to the rightful owners i.e. the Empakasi Community Group Ranch.

The Intended Purpose of Use of the Land by the Community

The Empakasi Group Ranch community is dedicated to assisting the Kenya Wildlife Service (KWS) to nurture and protect biodiversity within Nairobi National Park, and the broader ecosystem to which the park belongs. This include the surrounding wildlife dispersal area comprising of Kitengela, where the (Empakasi Group Ranch) is situated.

The Park, however, faces an existential threat from the urban sprawl, land grabbing and the surge in development activities around the city. As a community we work hard to protect the park through wide-spread conservation and cultural practices on the importance of the park. Nairobi National Park, is a revenue earner for the city and the country at large, a natural carbon sink that provides ecosystem services, and a place where all and sundry can witness the spectacle that is Africa’s wildlife.

Since its inception, the group ranch's community members have worked closely with KWS, being strategically positioned adjacent to the park, helped to develop and implement conservation and rangelands management initiatives around the park. The community has been instrumental in helping to keep open the rangelands south of the park which represent wet-season wildlife migration routes and dispersal areas.