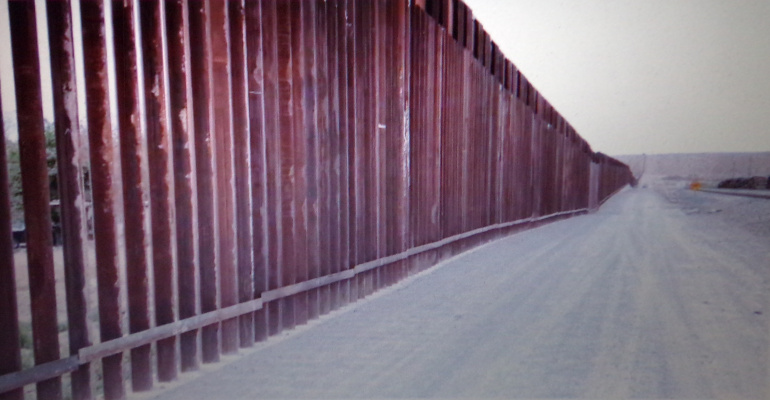 And ENFORCEMENT OF PROTECTIONS FOR NATURAL BORN AND LAWFUL U.S. CITIZENS (In length, because of longstanding grievances, since at least the year 2005!)

WE THE PEOPLE, ESPECIALLY, THOSE OF us/U.S. along the southern border, also openly declare that this is INDEED AN EMERGENCY! AS NOT ONLY are criminal gang members, human traffickers, fleeing felons, murderers from other countries and violent cartel members with drugs and guns, pouring across our porous southern border—there are also terrorists coming into our country along “unmanned” and “non-river” portions as well!

Facts are: ILLEGAL IMMIGRANTS IGNORE “Ports of Entry”, they JUST WALK IN, or “climb over” or drive through cattle fencing, etc.

And they also come through wide open, un-fenced, un-walled or non-barriered land, that makes up the southern border with MEXICO in NEW MEXICO, ARIZONA and CALIFORNIA and/or cross the Rio Grande River in Texas! Essentially making our southern border nothing more than, just a line drawn in the U.S. Southwestern sand!

“We the People” also DECLARE THIS AN EMERGENCY, AS THERE IS EVIDENCE of these facts and that most of these facts were MADE KNOWN TO MANY IN OUR GOVERNMENT and the FBI—as far back as 2005, and that our own Government and/or Congress have continued to ignore us and do nothing to help us!

Here, we will also state that: We commend President Trump, for hearing our concerns, declaring this emergency, and finally coming to the aid of the Citizens of the United States!

Furthermore, in regard to other concerns of our security and safety: We the People, demand that ALL refugees, asylum seekers and illegal aliens be fingerprinted, photographed, and DNA printed, to be entered into a heavily secured database as well as hard-copied (in case of data breach) to further insure that ALL persons entering our country, can be further “background” checked with other criminal evidence resources, law enforcement, police reports/evidence lockers, etc., to ensure “criminals, rapists, murderers, terrorists, etc.” do not gain entry or citizenship in our country, ever, and that such persons will be “forever banned” from entering the United States again! And especially, when based on those additional results!

Further reasoning for this is:

For the security and safety of children and minors,

As children and minors are also used as human shields or “human tickets”, to enter the United States illegally,

DNA matching of Families will further ensure that:Children have not been kidnapped, and put through a caravan or human trafficking situation for the sole purpose, of Illegally Entering Adults expediting entry into the United States.

Furthermore, We the People, AGREE on returning migrants to a “contiguous foreign territory” during their immigration proceedings. (Rights provided in the U.S. Constitution belong to U.S. citizens, ONLY, and are not to be applied “to foreigners” of any kind, who have not applied and become a U.S. citizen lawfully!)

We demand LEGAL ENTRY ONLY, of which, under U.S. law, immigrants would be waiting in their own countries, during proceedings or the application process, anyway!

We further state that: American Civil Liberties Union (among others in the several States) isn’t justified in their lawsuits which help FOREIGNERS. (Whom: ARE NOT afforded the same rights under the U.S. Constitution or American law, which are afforded to lawful American/U.S. citizens.) These lawsuits obstruct justice, waste taxpayer money, and go against American/U.S. civil liberties and OUR CONSTITUTIONAL RIGHTS to demand a border wall for OUR PROTECTION, safety and security. The demand and building of a border wall is not unconstitutional! Does it state in it, anywhere, that we can’t build a border wall? The answer is NO, it does not!

Furthermore, We the People DO NOT recognize the United Nations as having any say over U.S. immigration policies. The UNITED STATES is a SOVEREIGN Nation, a Republic, by & for the rights & protections, solely, of its sovereign people & lawful residents of the United States of America.

FURTHERMORE, We the People have sought Congress, long and hard, for an Article V Convention of States, and a “re-dress of our long standing grievances” to no avail. Our own States Representatives have betrayed us/U.S. and have continually obstructed and hijacked our re-dress for justice of any sort. AS SUCH, WE THE PEOPLE, HAVE CALLED FOR THIS “EMERGENCY” DECLARATION BY PRESIDENT, DONALD J. TRUMP, for our longstanding grievances regarding our borders, since 2005! And thereby exercising our 10th Amendment right!

We the People, believe and demand that we should have a say in how our taxpayer monies are utilized, and we further state here that we do not agree or support any part of the new Spending Bill or any bill that will allow for further funding of or use of any U.S. taxpayer money for transportation, housing, and other support, etc., or for the busing in of illegal immigrants to “illegal immigrant friendly” institutions, centers and legal counsel, which is an abuse of U.S. taxpayers.

Aiding and abetting criminal activities, and harboring “illegal immigrants,” terrorists or criminal MS-13 or other gang members is a crime punishable by U.S. law! WE DEMAND ENFORCEMENT of our IMMIGRATION LAWS and the prosecution of Politicians who think that they are above our laws, if they aren’t prosecuted; then our laws mean nothing! However, these violations are punishable (x) times how many persons they aid and abet! With usually more than one crime for each illegal!

Because Congress and our several States Representatives have worked, to aid and abet criminal illegal immigrants, rather than to protect lawful American/U.S. taxpayers, We the People, denounce the new bills that have been construed to put into law in our States, that make it illegal for our lawful U.S. persons, businesses, etc., to support or contract for the building of the border wall, and/or bills that will be used to deny use of our states essential resources, including water—to help build the southern border wall! These bills/laws have been construed to VIOLATE OF OUR CONSTITUTIONAL RIGHTS and to punish us if we extend that right, in any way, to support OUR President! (Like New Mexico House Bill #287)

Our representatives have gone behind our backs to OBSTRUCT justice and the building of a border wall; they have betrayed us and now seek to penalize us for any support we may give to the building of a wall! It is clear that they are no longer OUR VOICE! WE DEMAND to know about any and all money they are making, or how they are profiting from these transactions and how many “illegal immigrants are voting” in ALL STATES elections! Because of this, we believe that we are not fairly represented! And we demand prosecution of these so-called U.S. representatives to the utmost of the law!

Furthermore, reasoning for such, facts and evidences, and other longstanding grievances, are:

#1: We do NOT support lawmakers of the several States or Congress, decisions to sue our President, Donald J Trump, for exercising his Presidential rights for “declarations” as provided by U.S. law and policy!

#2: We are in fear of our safety and property from invading illegals and we therefore demand a wall be built at our southern border, immediately, as is our Constitutional right to demand! With problems on the border since at least 2005!

#3: There are also, counties that have started to adopt a 2nd Amendment resolution, because state lawmakers are further construing gun bills/laws violating our Constitutional rights to protect ourselves against invading illegals & keeping us from purchasing guns from other lawful citizens.

Also, CURRENTLY, there areContractors working on BORDER WALL PORTIONS along the New Mexico and Arizona border sections, whichare actively being SHOT AT by illegal border crossers / human traffickers, etc. And the Governor of New Mexico, Michelle Lujan-Grisham states there is not a crisis at the southern borders and has sent the National Guard away from the southern border, where this is happening!

Furthermore, in State and Federal Government officials so doing the above mentioned, by writ and otherwise; WE the PEOPLE, state and are witnesses, and do confirm by our signatures below, that our Constitutional Rights have been infringed, and if our representatives do not understand this word, we are informing ALL of our (so-called) States Representatives, Congress, the Senate, & all of their Staff, that infringed means to; Actively break the terms of, or act so as to limit or undermine (something); encroach on.

Furthermore, we the people do bear witness and by our signatures confirm that our several State’s Representatives and/or Governors & their staff members, also our several Congress members, as well as our several Senators, by their writs have construed bills & laws, local & federal, as well as are confirmed in mail, news articles & videos (as testimony against them) that they have committed unlawful acts & TREASON, by adhering to, & aiding & abetting our ENEMIES, per 18 U.S. Code 2383 & per The Constitution of the United States, Article III, Section 3[1], which reads:

Treason against the United States shall consist only in levying War against them, or in adhering to their Enemies, giving them Aid and Comfort. No Person shall be convicted of Treason unless on the Testimony of two Witnesses to the same overt Act, or on Confession in open Court.

Furthermore, with these things being said, WE the PEOPLE, hereby inform States Representatives, Congress, the Senate & all of their Staff members, & hereby give the legal definitions of “Qualified Immunity”, &, “shall not be infringed”, and WE also inform what is, “Treason against the United States.”