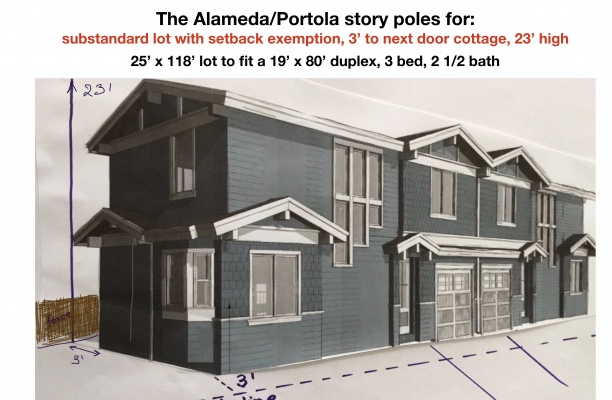 Regarding proposed two-story building on lot APN 047-208-100 at Avenue Portola and The Alameda, in El Granada.

We the undersigned, residents of El Granada, are concerned as to the size and scope of the proposed building, illustrated by the story poles on the lot.

The proposed building violates the design principles cited here - taken from the Midcoast Design Standards as published by the San Mateo County.

1. The purpose of the Design Standards is to encourage new single-family homes and additions...that are complementary with neighboring houses, the neighborhood of each Midcoast community, and the surrounding natural setting.”

Note that the two neighboring homes are small one-story cottages, and all other structures on either side of this block of Avenue Portola are also one-story.

2. Special attention should be paid to those transit or buffer areas where residential and open space land uses meet.

This intersection is the crossing axis of the Burnham Plan and is a key visual signature to El Granada. The size and setting of this building disrupts the balance and sense of openness at this central intersection.

3. A single building out of context with its site or neighborhood...can appear disruptive.

The height and mass of this proposed building is disruptively out of scale with its surroundings, and looks to distract from the overall appearance and harmony of the setting. It also significantly invades and compromises the privacy of its immediate neighbor.

4. The building does not fit with the County Zoning Regulations:

Development shall be located, sited and designed to carefully fit its environment so that its presence is subordinated to the maximum extent practicable.

Update: This substandard parcel proposes a building with a 19’ x 80’ foot print. Since it is a corner lot, the regulations (Section 6408.1) call for a setback of 5’ from the 167 Portola house and a 10’ setback to The Alameda. As it is, it has a 3’ setback both to the neighbor and The Alameda. We find that the project should not be granted exceptions on the grounds of not fitting the Finding (Section 6503) that :

“The proposed development is proportioned to the size of the parcel on which it is being built.”

Update: After two Design Review hearings the owners of the parcel has been asked to make major modifications if they are to get the recommendation for approval.

Alert: The other lot on Portola, between 149 and 167 Portola, is owned by the architect of the above design, Sean Freitas. This lot is even smaller, but apparently the owner wants a 28 foot building on that parcel! He is based in Livingston, CA, 115 miles away, see seanfreitas.com.

UPDATE: According to the County planning department website on June 16, the revised plan for the project is now a single story building, with a max height of 16’. My neighbors and I, and I guess the people who signed this petition can rejoice