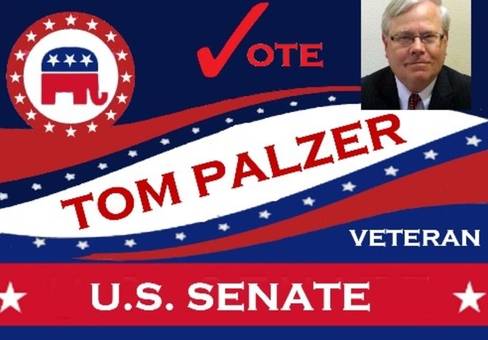 Support Tom Palzer, 'non-political' conservative Republican for U.S. Senate - California - by signing his petition for election. The Primary election is quickly approaching and his goal is to collect 500,000 signatures throughout the State of California one at a time.

Tom is the most experienced of all candidates in the race with over 32 years working with and advising elected and appointed officials at ALL levels of government. Tom is not a politician. He is a knowledgeable, experienced man who has run for office before and understands the commitment and strategies of a campaign. His father was a precinct committeeman for over 39 years. Tom was passing campaign literature at the age of 7, two years before Little League!

Tom is running to restore conservative government to California and the Nation. His top priorities are National Defense (including fully-funding State and Local Law Enforcement and sealing our borders), Anti-terrorism, Economy, immigration and Veterans Affairs. He is a United States Air Force Veteran and has a Masters degree in Urban Planning.

As a long-range Planner, Tom served as a City Planner and Executive Director of Planning. From 2000 to 2008, he served as Deputy Director for Operations for the Chicago Area Transportation Study.

Tom believes in campaign finance reform. He self-funded his 2016 Campaign for U.S. Senate, basically 'walking-the-walk.' The time has come for him to seek contributions from his friends, colleagues, political and appointed officeholders, his fellow veterans throughout the State of California, law enforcement and voters in all 58 counties in the State and major donors throughout the U.S. During his 2016 campaign, he recreived contributions from donors in seven (7) states.

Other issues of great importance to Tom include Veterans Affairs, support for Israel and keeping Iran from developing a nuclear capability, reducing the size of government to make it less intrusive in our daily lives, reducing our National Debt so our grandchildren won't have to, life at conception, immigration reform, change of our welfare system to a series of 'welfare-to-work' programs, placing a Moratorium on Common Core, putting God, prayer, our flag and teaching American History back in our public schools and religious symbols back on public property, the sanctity of marriage between a man and a woman and religious freedom.

You can also help by advancing Tom's campaign called: BE MY VOICE!. The campaign calls for telling your family, friends, colleagues, and members of organizations you belong to that you support Tom Palzer for U.S. Senate in 2018.

As Tom says, DON'T LET INEXPERIENCE REPRESENT YOU IN WASHINGTON!

Sign Tom's petition and let him know you're behind him with your vote and a contribution. Please send him an email at: info@tompalzer.com to confirm that you've signed the petition.

Go to: www.tompalzer.com and click on the CONTRIBUTION BUTTON. It takes about 3 minutes to help Tom continue his journey to the U.S. Senate.