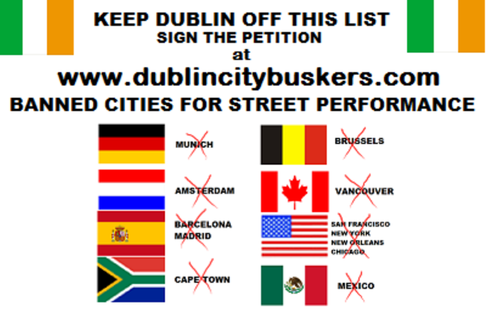 SAVE BUSKING IN DUBLIN.

1642 people have signed this petition. Add your name now!

The Bye Laws were drafted without any consultation with the Dublin City Buskers and this seems to be there main flaw. They are unworkable and impossible to police all the time.

The Bye Laws created two areas in Dublin where busking is banned no exceptions. This is a very worrying trend that is quiet common in other European cites like Amsterdam and Madrid.

Bye laws were introduced in these European cities and then systematically revoked making it illegal to perform on the street without a permit. This European trend can continue very easily in Dublin without massive public Support.

Follow this link for A true story from Amsterdam

The current bye laws are currently under review. Help stop a complete ban on Street Performance in Dublin and demand that Dublin City Council sit down with the Dublin City Buskers, and the other key stakeholders to draft a workable solution.

In Cities like London, Melbourne and Sydney Street performance is celebrated and completely supported by the relevant city councils Arts department. Why cant Dublin be the same? We are calling on the Minister for Arts and Heritage to formally recognise street performance as a legitimate art form in Ireland.

The following Artists have all spent time busking: