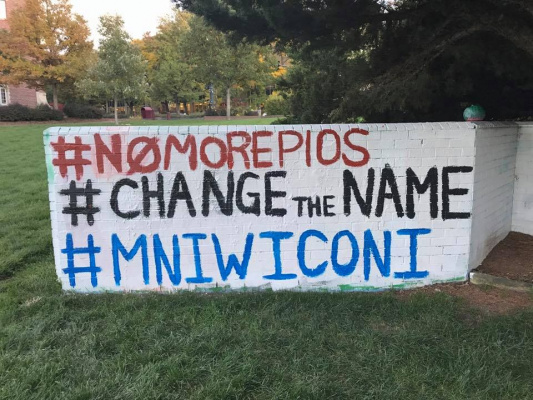 DU: Respect Your Students and Change the Name

The time has come for DU to embrace change in accordance with its mission of inclusive excellence and its promise to be be "a private university dedicated to the public good" by defining itself with a new nickname, as deeply desired by the student body.

LetsGoDU, a blog ran by DU alumni to cover the university's sports and advocate for the abandoned mascot Boone, reported that on January 16th, the university's Board chair, Doug Scrivner, emailed the alumni to tell them that DU's "Pioneer" nickname is going to stay, despite not only the Native Student Alliance's request to change the name, but the wishes of the student body for a more representative nickname. The email stated, “I want to be clear: the Board and the senior leadership of the University have no plans, no efforts and no intentions of changing our nickname. We proudly claim the name Pioneers in all its dimensions. While our history, like that of all institutions, is complicated and reasonable minds can differ in their assessments, we will endeavor to continue to explore the good and the bad, but in all cases we will own and learn from our history. And being Pioneers is part of both our history and our future.”

We members at NSA are both disappointed and outraged at this decision.

The word “pioneer” is defined as one who is the first to explore and settle a new country or region. To Indigenous people, the word is associated with Europeans Americans who forcibly colonized Indigenous peoples. It represents the violent history of westward expansion, settler colonialism, oppression, genocide, and the systematic violent displacement of Native people from their lands. “Pioneer” also represents the history that DU was a part of. Founder John Evans was complicit in the Sand Creek Massacre in 1864, the same year that DU was founded. In the findings from the John Evans Study Committee, it was stated that John Evans is culpable for the Sand Creek Massacre. This is exactly in the spirit of a pioneer. Pioneers killed Indigenous people and stole their land. Pioneers do not represent the spirit of the student body at the University of Denver and it must be changed. DU has said they are dedicated to inclusive excellence. They have promised to make up for their wrong doing to Indigenous people in the Denver community. Yet still, they refuse to show any action behind their words. They continue to participate in modern-day violence against Native communities.

This is not just an issue for Native students on campus, but for the whole DU community. The university is lacking school spirit because it lacks the accurate imagery that represents us to the broader community. The student body wants a mascot that represents them — that they can be proud of. A small number of alumni are disregarding the entire student body by fighting to keep the nickname.

For too long Indigenous students on campus have been ignored, forgotten, and at the receiving end of DU's complicity in violence against our people.

Please add your signature to this petition to demand that DU change the Pioneer nickname to a name the reflects the university's values, the true spirit of the student body, and that respects Indigenous people.