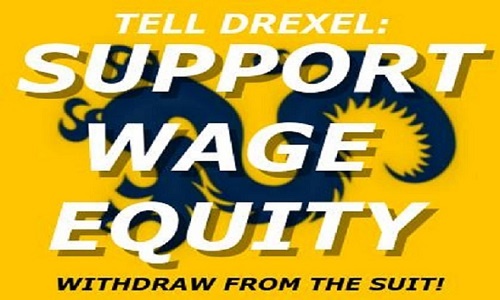 On behalf of the faculty, staff, students, alumni, and accepted students of Drexel University, we respectfully urge you to withdraw from the Chamber of Commerce for Greater Philadelphia (“the Chamber”) lawsuit against the new ordinance put forth by the City of Philadelphia (“the City”) to combat wage discrimination. The ordinance amends the City’s “Fair Practices Ordinance: Protections Against Unlawful Discrimination”[1] by adding a new Chapter on wage equity that would make it unlawful for employers “[t]o inquire about a prospective employee’s wage history,”[2] or “[t]o rely on the wage history of a prospective employee… in determining the wages for such individual.”[3] Allowing employers to rely on wage history in determining future wages, only widens the wage gap.[4] This is contrary to our fundamental belief in the equality of all humans. We, as a diverse and unified Drexel community, demand that Drexel withdraw from the costly litigation which seeks to perpetuate wage discrimination.

The Chamber asserts that “wage history is… important to the hiring process because employers use it, among other things, to identify job applicants they cannot afford, to set a competitive, market-based salary for their positions, and to assist in evaluating applicants’ prior job responsibilities and achievements.” However, employers could, more accurately and effectively, achieve these same ends by different, more just, means. Salary history does not act as a “benchmark that enables companies to determine whether they are meeting or exceeding the market-value wage for any given position.”[5] Instead, salary history helps employers decide whether they are meeting or exceeding the market-value of the employee based upon the value allocated to them by their last employer, which empirical research has demonstrated can be the product of discrimination or bias.[6] Salary history “reflects the historical market forces which value the equal work of one sex over the other.”[7]

The Chamber’s claim that this Ordinance will have no effect on wage equity is based on the City being one of the first in the country to implement such legislation.[8] There is a wealth of evidence to support the position that prohibiting employers from inquiring about salary history is an important first step in narrowing and closing the wage gap.[9] The assumption that all employees are paid commensurate to their education, experience, and achievement in the workplace is problematic because it does not account for any past discrimination or bias that the employee may have already endured in previous jobs. In 2012, a formative empirical study conducted by the American Association of University of Women demonstrated that women get paid 6.6 percent less than men in their first jobs, even when controlling for demographics, occupation, college major, hours worked, and region.[10] When employers use an already disparate salary history to calculate compensation for new employees or raises for current employees, the gap widens.[11]

Exhibit H of the complaint, the Declaration of John Fry, states that “Drexel is strongly opposed to any form of discrimination, including obstacles preventing women and minority employees from advancing or receiving salaries free from discriminatory pay disparities.”[12] Salary history is one of those such obstacles. We ask that you give meaning to these words by withdrawing from the lawsuit which opposes banning an obstacle that effectively perpetuates and widens discriminatory pay disparities.

“[The Ordinance] will help ensure that pay decisions are based on position requirements and applicant qualifications rather than on a factor that likely reflects longstanding, gender-based wage disparities in the labor market.”[13] The Ordinance will also help steer employers toward more equitable ways of determining a candidate’s prior job responsibilities and achievements, and at setting competitive, market-based salaries for positions. Salary history is a major impediment to wage equity and the Ordinance represents a very important first step in eradicating the wage gap.

We insist that you immediately withdraw from the lawsuit and support wage equity.

[6] Corbet, C. & Hill, C., Graduating to a Pay Gap: The Earnings of Men and Women One Year after College Graduation, AAUW (October, 2012), available at https://www.aauw.org/files/2013/02/graduating-to-a-pay-gap-the-earnings-of-women-and-men-one-year-after-college-graduation.pdf.

[9] See Corbet, supra note 6; National Women’s Law Center, supra note 7. See also Graham, M. E., Hotchkiss, J. L., Gerhart, B. Discrimination by parts: A fixed-effects analysis of starting pay differences across gender. Eastern Economic Journal, 9-27 (2000); Thorsteinson, T. J. Initiating Salary Discussions with an Extreme Request: Anchoring Effects on Initial Salary Offers. Journal of Applied Social Psychology, 1774-92 (2011); Gerhart, B. Gender Differences in Current and Starting Salaries: The Role of Performance, College Major, and Job Title. Industrial and Labor Relations Review, 418-33 (1990); Groshen, E. The Structure of the Female/Male Wage Differential: Is It Who You Are, What You Do, or Where Your Work? The Journal of Human Resources, 457-72 (1991a).