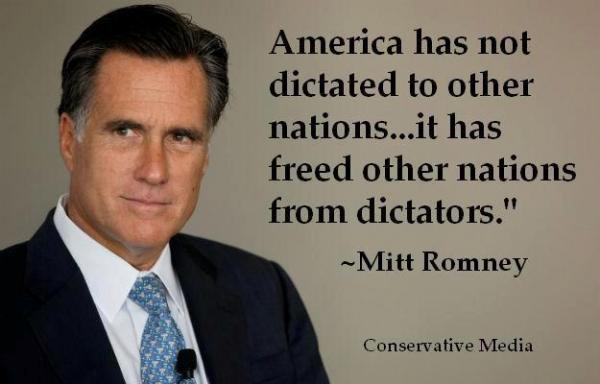 Whereas, the free market continues to be oppressed by onerous and growing federal regulations in every American industry, including and especially health care and education; and

Whereas, the federal government challenges states' rights through the Department of Justice and other stems of the executive branch by suing states on behalf of non-citizen populations or unions/special interest groups; and

Whereas, the abuses of the federal government through the IRS, among other bureaucracies, have oppressed voters and obstructed the workings of our democracy; and

Whereas, history has now taught us the cost of an inexperienced Commander in Chief both at home and abroad; and

Whereas, the failure to negotiate or lead on the part of President Barack Obama has led to gridlock and emergency situations in Washington; and

Whereas, C.E.O. Mitt Romney has proven his mettle as a free market champion who knows how and which government regulations are beneficial to society as a whole; and

Whereas, Governor Mitt Romney supports states' rights, believes the states to be the laboratories of democracy, and has brought divergent parties together to tackle issues such as health care and education at the local level; and

Whereas, Mitt Romney won 61 million votes in 2012 in spite of IRS voter suppression of conservative groups over the course of two years, and in spite of rampant voter fraud; and

Whereas, Mitt Romney continues to demonstrate his leadership by lending his understanding and expertise to the problems we as a nation face today; and

Whereas, Mitt Romney's political predictions have all come to fruition and/or light in recent months, showing an intellect, understanding, and leadership ability that must be wanted after the failures and scandals of President Barack Obama's tenure;

Now Therefore we the undersigned, call on Governor Mitt Romney to offer himself as a Republican candidate for President of the United States in the presidential election of 2016.