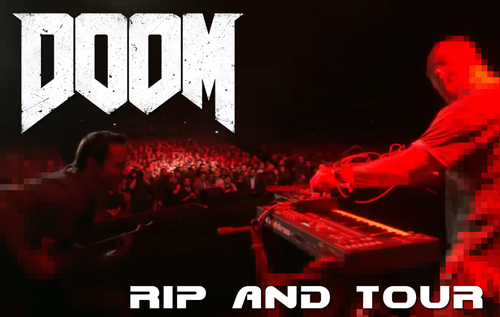 DOOM: Rip and Tour! Sign to bring DOOM to your town! Let's put the DOOM soundtrack on tour!

Did you happen to catch The Game Awards 2016 ceremony on 12/1/2016? It was a fine show but for me and many others, there was a segment of the show that stood out more than anything else: A live performance from the DOOM Soundtrack!

I rocked out, banged my head and was thrilled to see Mick Gordon, Sonic Mayhem and Matt Halpern all playing together to bring DOOM music, live and creepy, into our homes (watch it again here!). I couldn't help but wonder, how can I get the chance to see this in person!?

I wasn't alone, as others on Twitter were also asking this very question. @sonicmayhem replied to a fan: "You want us to tour tell @bethesda :)" (Original Tweet)

Well I say we do just that!

Sign this petition to show Bethesda that we all want to see Mick Gordon, Sonic Mayhem and Matt Halpern bring the same incredible, energetic show that we saw on the Game Awards to your town and rock the place! let's bring on DOOM: Rip and Tour!

Please keep in mind, in signing this, you're basically saying that you would be willing to buy a ticket to see these guys play live if they were to come to your town.