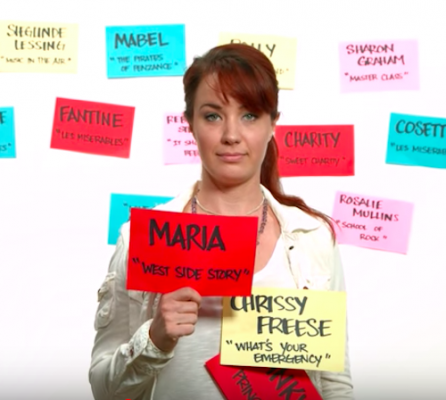 Project Am I Right 0

UPDATE: SIERRA BOGGESS HAS ANNOUNCED SHE IS WITHDRAWING

I don't know if you saw the story a little while back about casting in the upcoming Hellboy reboot. British actor Ed Skrein was announced in a role that was originally written as a person of Asian descent. After a couple of days of backlash on social media, Ed published an open letter about dropping out of the project. It's been hailed as a watershed moment for representation and actor responsibility and strength in standing up to whitewashing in Hollywood. Gratitude and support continues to erupt around Ed. It's been truly beautiful to see. He is seeing myriad unexpected benefits from turning down a huge payday and breaking a contract. I like to imagine he thinks it is worth it and that the overwhelmingly good publicity will mean that all of that risk will pay off with incredible karma for his career.

Sierra Boggess is already a hero to so many. She's a Disney Princess. Little girls and young singers all over the world already look up to her. She now has the chance to make a lasting legacy on the theater world by standing up for those whose voices have been ignored for too long. She has a chance to be a hero not just because of her talent, grace, and beauty. She has a chance to be a hero because of her integrity, bravery, and selflessness.

This isn't "just a concert." Video will circulate and last forever. I'm heartbroken that this means that a whole new generation of young singers will grow up with an even more recent legitimized example of one of the few iconic roles written as Latinx being whitewashed. People still use Natalie Wood as an excuse to cast white women as Maria. And that film was decades ago. Sierra will be a fresh new example to use for decades more. Or, Sierra will be a hero who stood up and changed the way the world thinks about casting Maria, providing improved conditions for young singers whose voices we never hear.

I hope she will choose to be the hero that she can be.

Thank you for your time,

Founder, Project Am I Right