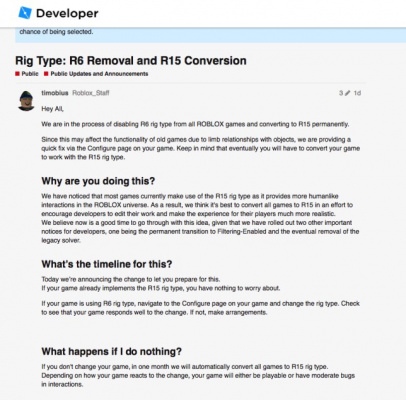 So, some of you may know roblox is removing R6 from all games. They say it is to make the game more "Realistic" and "Interactive". As a matter a fact, it only decreases the interactivity. This will occur when (as an example) a war group uses R6 compatible guns, those guns will no longer be able to be used because of the R15 rig. This will also effect the lego aesthetic the game had. The R6 animation really fits in with the name and look of the game. Also if you remove it form games, you can't really use R6 for anything! This only makes roblox look like Minecraft with humanlike animations. A lot of the staff that I know of on roblox don't even use R6! You people at roblox should really think about ideas before you do them. Removing R6 from games just ruins the entire lego aesthetic (as I mentioned before) from the look of the game and the name! So, I know this is unofficial, but, I hope we can get the roblox team to see this as a lot of us really like R6 and prefer it over R15.