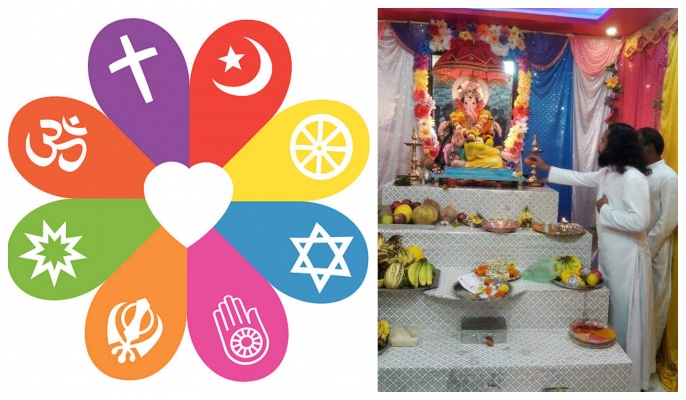 729 people have signed this petition. Add your name now!

Actions, pictures and symbols speak louder than words. The study of semiotics shows how such sign processes are, in fact, intended to communicate meaning at full volume.

A Catholic priest who dons his cassock, takes his flock to visit a family shrine honouring the deity Ganesh, and stands reverentially before the Ganesh idol during the Hindu festival of Ganesh Chaturthi, is communicating a high-decibel message.

The Goa archdiocese facetiously claims that such "performative speech" is witnessing to Christ. On the contrary, such actions are semiotic pointers witnessing to a radical religious relativism which puts the living Jesus on par with a clay Ganesh.

The diocese's feature article in its latest edition of Renovação, defends this relativism as promoting "mutual understanding, respect and collaboration between Catholics and followers of other religious traditions."

Does friendship between people of all faiths and none — a hallmark of Indian pluralism —require cassock-clad Catholic priests to visit idols? Are we not commanded to visit the sick, clothe the naked, feed the hungry, and love our neighbour, no matter what his or her religion?

When the featured picture on the cover of Renovação displays the symbols of the major world religions on flower petals all equidistant from the centre, what is the theological subtext being communicated?

Is it one of the uniqueness and definitiveness of the incarnate, crucified, risen and ascended Christ, or is it the icon of a new fruit salad of religions proclaimed by Cardinal Filipe Neri Ferrão — which arrogantly subsumes the distinctiveness of every religion under the new centre of a "heart?"

And does the Renovação iconography downgrade the cross of Christ — a "folly to those who are perishing, but the power of God to those who are being saved" (1 Cor 1:18) — by placing it on par with the Islamic crescent, the Hindu OM, the Buddhist dharmachakra, the Sikh khaṇḍā and other symbols in the pluralist pantheon?

Why is Cardinal Ferrão promoting the master symbol of a masonic relativism where Christ is dethroned from his position as the only way to God and demoted to one of the many ways — all pointing to an amorphous construct of "love" (represented by the rather juvenile symbol of a heart)?

In the Renovação apologia for clergy pilgrimages to Ganesh idols, Fr. Aleixo Menezes, rector of the Patriarchal Seminary of Rachol, brazenly attempts to gaslight the faithful by quoting two texts from St. Paul's first letter to the Corinthians on the topic of whether Christians may eat food offered to pagan idols.

Oddly, Fr. Menezes misses two key tenets of Paul's argument: first, the apostle categorically states that "an idol has no real existence" since God the Father and the Lord Jesus Christ alone are truly God (1 Cor 8:4).

"Therefore, my beloved, flee from idolatry," the apostle exhorts the Corinthian Christians (1 Cor 10:14).

Second, even if eating food offered to idols may be permissible, provoking scandal by consuming such food is "sin against Christ" because it causes "my brother to stumble" (1 Cor 8:13).

So why visit Ganesh idols if they have no real existence? And why trigger scandal among the faithful by affirming such pagan idolatry?

Even Hindu reformers like Raja Ram Mohan Roy condemned such idolatry since it "is not only rejected by the Shastras universally but must also be looked upon with great horror by common sense, as leading directly to immorality and destructive of social comfort."

Now, Catholic "reformers" like Fr. Menezes tell us that Jesus' Great Commission to "go and make disciples of all nations, baptizing them in the name of the Father and of the Son and of the Holy Spirit, teaching them to observe all that I have commanded you" (Matt 28: 19) must be replaced by "Go and visit Hindu families worshipping Ganesh idols."

Indeed, Menezes quotes the Statement of the Diocesan Synod 2002 claiming that "the Church can fulfil her mission … by promoting dialogue with people of other religions so that all come together and collaborate in building a New Society."

With breathtaking arrogance, Menezes is telling us that diocesan synod statements now supersede the inspired and infallible words of Jesus and the apostles as recorded in Sacred Scripture!

Menezes further turns the centrifugal mission of Jesus (Go out from the centre to all parts of the earth to preach the Gospel) into a centripetal option using a fatally flawed analogy: "When the flower is in full bloom the honeybee comes to suck the nectar; the flower does not go in search of the honeybee."

If St. Thomas and St. Francis Xavier had listened to Fr. Menezes and waited in Jerusalem and Spain for Hindu honeybees to hum their way across the ocean and suck the honey of the gospel, our ancestors in Kerala and Goa would never have known the great salvation offered in Christ.

Menezes also offers us a false dichotomy between proclamation and good works. We need both: our evangelistic proclamation clarifies our good works, and our charitable works of witness give credibility to our preaching of the Gospel. What God has brought together, let not Fr. Menezes put asunder!

The word "Catholic" is derived from the Greek "kata" (according to) and "holos" (the whole or universal). It is a "branding" stamped on what "has always believed in the Church everywhere, always, and by all" (quod ubique, quod semper, quod ab omnibus creditum est).

"Catholic" is not what modernist prelates and priests like Cardinal Ferrão and Fr. Menezes make up in keeping with the zeitgeist (spirit of the age). Indeed, as St. Paul warns us, "Even if we or an angel from heaven should preach to you a gospel contrary to the one we preached to you, let him be accursed!" (Gal 1:8)

Update: This petition has now received international coverage in the American news media Church Militant/St. Michael's Media. Here is the link to the news report: https://www.churchmilitant.com/news/article/cardin...

The media has also covered the story of Goan clergy paying homage to Hindu idols in two previous stories: