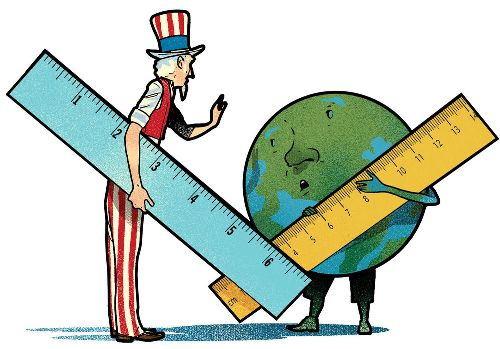 Don’t get left behind, go METRIC!

While the rest of the world is currently using the metric system, the US is left outand alone using a very confusing and hard to translate imperial system. The United States NEEDS to convert to the metric system!!!!!!!

The metric system helps identify numerical measurements in a much more easy, simplistic, and fool proof way compared to our current system!

Very easy to remember! When you are trying to convert measurements just add or remove zeros! With the imperial system we are using now, we constantly have to convert back and forth! Inches to centimeters… gallons to liters…. miles to kilometers!

We are already using the metric system in many parts of our lives. Medicine is measured in milligrams, engineers doctors, astronauts, mechanics measure in meters… the metric systems is here and it’s time to commit! We need to join the rest of the world and GO METRIC!!! It will save time and money converting from the imperial unit system to the metric system! In 1999 NASA lost a $125 MILLION Mars orbiter because a team member used imperial units instead of metric units! Millions lost!!

The change is GRADUAL.....so just EMBRACE it!!