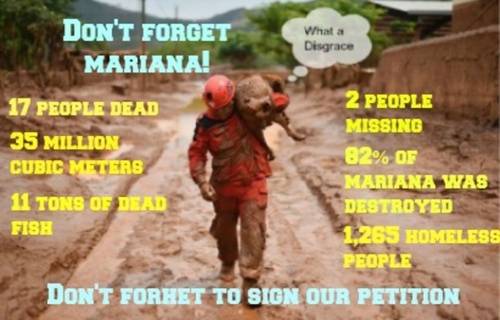 Hi, my name is Dylan Dovkants. My friend Paulo Lee and I are learning about Finite Resources and the Mariana disaster for our PYP Exhibition.

Mariana is a town in Minas Gerais, which has been the location of a tragedy. What happened is that a dam broke at the Samarco iron mine near the city and caused a terrible disaster. The dam had mud mixed up with iron mining residue. When the dam broke, all that mud with iron started to spread all over the region, destroying a whole community, farms, has polluted Rio Doce that was Mariana’s and Espirito Santo's water source. In short, the people from Mariana are without water, many without houses and many more lost their jobs. In addition, the slurry is turning to iron powder now. If that the mud was toxic, the air there will also be contaminated.

When we started doing our research about the disaster, we found out, for our surprise, that no one was arrested after 5 months. So our petition is to punish those who are responsible and make them pay for the problems they caused. When we have got to 1000 signatures, we will send this petition to Sarney Filho. He is the head of the ministry of environment from Brazil.

Let's get to our goal! Don't forget Mariana!