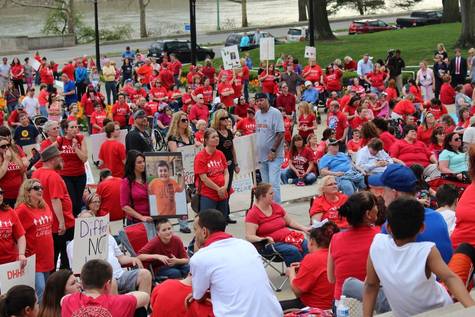 2164 people have signed this petition. Add your name now!

The time to advocate is here again! Several months ago, a letter was drafted and submitted to Speaker Armstead with signatures of many supportive Senators and Delegates requesting further inquiry into the cuts to waiver that would impact thousands of West Virginia citizens and constituents. To date, no action has been taken.

Therefore, in light of the announcement of CMS’ approval of West Virginia’s application that we fought so hard to have revised, we are reaching out to ask that you use your voice to implore the State conduct a legislative audit of the WV Title XIX Intellectual/Developmental Disability Waiver program (IDD Waiver). We are asking legislative members to hold WV DHHR to the same accountability level at which those accessing I/DD Waiver are held.

You can have your voice be heard by signing this petition today!

Below you will find a list of the key issues that launched or have come about during this advocacy process that began in the spring of 2015, followed by a list of issues that need to be addressed by those responsible for implementation or oversight of this vital program.

Cost-saving measures that benefited the State of West Virginia were included in an application that was submitted to CMS without a discussion with or input from Legislators during the Legislative Session.

There are inaccuracies in the tool that is used to determine the budget, as the algorithm is not consistent and seems to be broken. A detailed explanation about how the algorithm is determined and formulated cannot be obtained by participants, families, or advocates.

Agencies provide self-reviews and utilization reports to BMS. While it is expected that all agencies comply by providing services within the framework and budget parameters, concerns with lack of enforcement and accountability exist.

No one wants this program to be more effective, sustainable, and efficient than the people using it. The way to do this is not through more unexplained drastic cuts and an unclear transition plan. The WV DHHR’s “plan” will lead to greater costs to the state and a severe compromise to the safety, independence, and inclusion of people with intellectual and developmental disabilities across West Virginia.