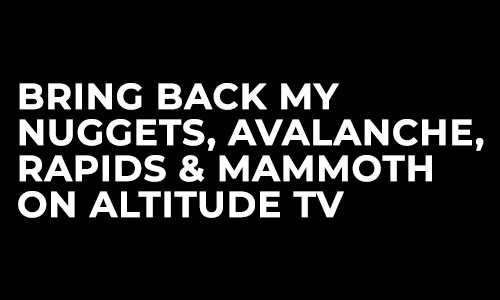 Bring Back My Nuggets, Avalanche, Rapids & Mammoth On Altitude TV

After 15 years of uninterrupted carriage, Comcast and DISH Network continue to elect not to carry Altitude Sports & Entertainment, thereby denying hundreds of thousands of fans the ability to watch the Colorado Avalanche, Denver Nuggets, Colorado Rapids, Colorado Mammoth and several local high school, college and professional sports teams in the Rocky Mountain region. They do so even in the face of DirecTV and Altitude Sports reaching an agreement as of October 31, 2019 to broadcast all these teams.

Comcast and Dish Network continue to remain steadfast in their use of hardball tactics, in hopes of making more money for themselves and making fans suffer by missing out in the ongoing NBA and NHL seasons. This is simply unacceptable. The hypocrisy is stunning. Comcast owns seven similar sports networks across the country and continues to carry them and provide them to its customers. Comcast claims that it is protecting its customers, all the while continuing to charge them for a regional sports network that they no longer make available to them. Denver-area based DISH Network bolstered its subscriber numbers and bottom line by being the first major provider to sign an agreement with Altitude when the network launched in 2004.

We hope both these carriers will come to their senses and listen to their customers and our fans, who deserve to watch their hometown teams amid these special seasons.

Therefore, Altitude is teaming up with sports fans across its 10-state territory to demand that Comcast and Dish Network put our Regional Sports Network back on the air immediately. Please sign our petition and forward the link to fellow sports fans.