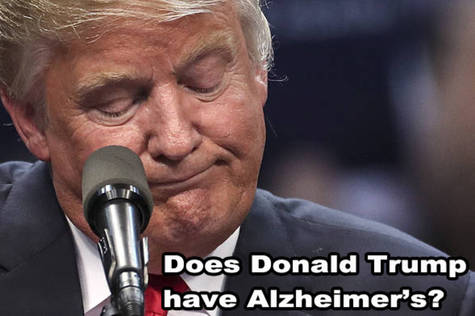 Does Donald Trump Have Alzheimers?

As American citizens about to choose our next President, we need an answer to the following question: Is Donald Trump mentally fit to be the next President?

The Alzheimer’s Association tells us that if two of the following core mental functions seem impaired then it is time to seek medical help: Memory, communication and language, ability to focus and pay attention, reasoning and judgment, visual perception.

Last September, while speaking at a campaign rally in Buffalo, New York, Trump confused 9/11 with 7/11. He has attacked his political opponents with petty insults rather than engaging in meaningful debates and perpetuated unfounded conspiracy theories about the authenticity of President Obama's birth certificate and recently, claiming Obama secretly supports the terrorist group, Isis.

At 70 years old, Trump would be the oldest President ever to take office next to Ronald Reagan who was 69 when he was elected. Ronald Reagan's son wrote that his father, who was diagnosed with Alzheimer's in 1994, was already showing symptoms of the disease by his second term.

In his assessment of Donald Trump's health, Trump's personal physician claims that his "physical strength and stamina are extraordinary” but was his mental health evaluated?

Before we can confidently vote for any presidential candidate over 70 years of age, they need to be screened for the early stages of Alzheimer's disease.

Donald Trump should undergo the MMSE (Mini-Mental State Exam) and publicly release the results. It is our responsibility to make certain that our next President is physically and mentally fit to take office.

Please sign this petition and forward to as many potential voters as possible.

This petition was brought to you by the Sick and Wrong Podcast.